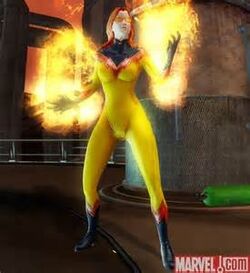 Little is known about Firestar's life before the Civil War. It can be assumed to be similar to her mainstream counterpart.

Firestar was a member of the New Warriors incarnation that had their own live-action series before the Civil War. During the aforementioned event, Firestar sided with the Anti-Reg heroes. At some point after the Prison 42 breakout, Firestar was assimilated into the Fold as she was one of the guards for the repeater tower in Iceland.

Firestar's powers do not grant her any particular immunity to the effects of intense heat other than that generated by her own microwave powers.

Equipment: Full-body sheath of micro-circuitry designed by Hank Pym and worn under her uniform; siphons off and absorbs excess microwave emissions to protect Firestar's physiology from her own radiation that was affecting her cells, and diverted it in a way that would "kick start" her natural immunity to her own powers.
Transportation: Flight through her powers, Quinjet
Weapons: None known.

Retrieved from "https://marvelcomicsfanon.fandom.com/wiki/Angelica_Jones_(Earth-6109.2)?oldid=201581"
Community content is available under CC-BY-SA unless otherwise noted.