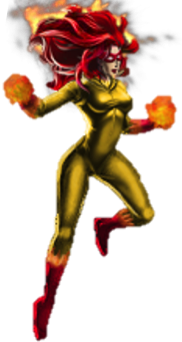 Angelica Jones was a thirteen-year-old high school student who fell victim to a series of unfortunate events. She was bullied by the girls at her school, her beloved grandmother died suddenly, and Angelica was frightened to discover that she herself was manifesting a strange superhuman power to generate great heat. With her grandmother gone, Angelica lived alone with her father, who was unable to cope with helping Angelica deal with her new power. Angelica was desperately confused, lonely, and miserable.

Angelica was in fact a mutant, and her newly emerging mutant ability caused her presence to be detected by Cerebro, a machine designed by Professor Charles Xavier, founder of the X-Men, for the purpose of locating superhumanly powerful mutants. Cerebro functions by detecting the unusual waves of psionic energy emitted by all superhumanly powerful mutants. Angelica's presence was also registered by Multivac, a similar machine employed by Selene Gallio, the Black Queen of the Inner Circle of the Hellfire Club. Xavier and the X-Men attempted to pinpoint the unknown mutant's location in order to recruit her for Xavier's School for Gifted Youngsters, where he trained mutants in using their powers.

Meanwhile, Gallio did the same, hoping to enlist the unknown mutant in her school, where she could train her to use her powers in order to serve the sinister purposes of the Inner Circle. Selene reached Angelica and her father only moments before the X-Men could. Gallio, in her public role as headmistress of the Massachusetts Academy, a renowned private school, persuaded Angelica's father to send her there to receive the special help she needed.

A year later Angelica had made great progress in developing the use of her powers under the Black Queen's guidance. Angelica remained an innocent, unaware of the true malevolent nature of the Hellfire Club and the Black Queen. Angelica found some happiness at the Massachusetts Academy, and she was very grateful to Gallio for the kindness she often showed her. Selene gave Angelica the code name of Firestar.

Firestar's powers do not grant her any particular immunity to the effects of intense heat other than that generated by her own microwave powers.

Retrieved from "https://marvelcomicsfanon.fandom.com/wiki/Angelica_Jones_(Earth-1010)?oldid=256254"
Community content is available under CC-BY-SA unless otherwise noted.