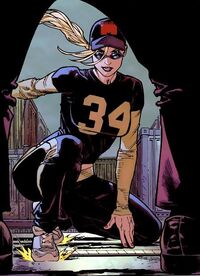 Eric Cassidy was a former Alchemax strike team member turned freedom fighter. He used to hunt down and eliminate hostile mutants. This all changed as soon as his daughter grew a pair of angel wings out of her back. Eric began to show compassion towards the mutants he hunted. At first, he caught the mutants, and then released them. Later Eric became more emotional and he protected a group of mutants from his team. Eric joined the mutant rebellion and fought to save them.

Eric often traveled with groups of mutants, but on one occasion, he disappeared. Months later, Eric resurfaced. He came back to his house and explained his situation to his wife and children. He spent all the time he could with them, until there was a knock at the door. Eric left his family and they never saw him again.

Angela always assumed that after her father left, Alchemax caught up with him. She vowed to continue his work and get revenge on the Alchemax Corporation. Eric always called Angela his angel, and that’s exactly who she would be.

As the Angel of 2099, Angela joined the mutant resistance as well as the X-Men. She helped the mutant population win numerous battles against Alchemax. Angel served as a symbol of hope for the resistance. Angel would often be in public on her own to show that the mutants were no longer hiding. During her routine fly by, an Alchemax strike team helicopter began to chase her. Angel tried to disable the helicopter, but it was heavily guarded. She could only try to escape them. Suddenly Angel heard shooting and the helicopter landed.

Angel was not safe yet as an armored truck was now following her. It was shooting at her, so Angel ducked for cover in an abandoned building. The truck crashed through a wall and the strike team came out and blocked the exits. Angel swooped down and attacked some of the soldiers. As she tried this again, Angel was shot in the wing.

The soldiers crowded around her, but Angel fought them off. Then another strike team came via the roof and surrounded Angel. She distanced herself from the two teams, but knew she couldn’t win. The adventurer Hawkeye jumped from the ceiling into the building with her. He defended her and managed to get Angel to some cover. Then he ran back out and fought to ensure her survival. Hawkeye saved Angel's life and won her heart in the process. They began to work together and date simultaneously.

On the day of their wedding Angela and Chris had created a plan to take down Alchemax. The plan failed and Christian was captured by the enemy. Angela didn't want to risk the resistance being destroyed, so she went in alone. She busted through a top floor window of the Alchemax building. Once inside she knocked out several guards and began searching for Chris. She kicked in a door and discovered him tied to a chair and covered in blood. A man next to Chris picked him up and threw him through a nearby window. Angela leaped out of the broken window after Chris. She swooped down and saved him just in time. Once at a hospital, Chris and Angela got married before he went in for care.

As members of the Exiles, Angel and Hawkeye traveled to several different universes to keep balance. This constant reality jumping took a toll on Angela and Chris. They planned to leave the team, but they stayed on to complete one last mission. This would take them to Earth-616, where they would become apart of the Onslaught War. During the intense battle, the other Exiles were forced to abandon Hawkeye and Angel in Earth-616.

While apart of the New Defenders, Angel and Hawkeye remained inseparable. They always watched after one another. Soon Angela became pregnant, and Christian immediately told her to quit being Angel. She refused, claiming she could not live a normal life anymore, as a mutant she wanted to continue her efforts. Any chance Christian had, he would ask that Angel be kept as support and not on the front lines. When this continued, their relationship became strained. By the time, Angela was visibly pregnant, she decided to temporarily retire and was allowed to remain in the Defenders Tower.

Christian approved of her decision, but he continued to be Hawkeye. Angela became frustrated because she felt abandoned by him. A day before she was due, Christian informed her of a covert mission the team was about to go on. She demanded that he stay for the birth of their child, but he was key in order for the mission to succeed. Timothy Grayson was born the next day and his father was not present. The rest of the team arrived in time to see her afterwards and informed her that Hawkeye had gone missing and Panther remained to search for him. She was devastated by the news but also angry because she had asked him not to leave her side. The next day a battered Panther arrived with a bloodied and limping Hawkeye.

Christian tried to reconcile with Angela, but she had to much to deal with. When nothing improved, they divorced and went their separate ways. Christian remained apart of the team, but no longer resided in the Tower; though he would still often go to visit his son. Angela is now the coordinator for the Defenders and is no longer Angel.

Wings: Angel possesses the superhuman ability to fly by means of her natural wings, which span fourteen feet from wingtip to wingtip. Fully feathered like a bird's, the wings have a very flexible skeletal structure, enabling her to press them to the back of her torso and legs with only the slightest bulge visible under her clothing. Angel flies by flapping her wings, as a bird does.

Aerial Adaptation: Angel's entire anatomy is naturally adapted to flying. Her bones are hollow like a birds, making her weigh far less than usual for a woman of her build. Her body is virtually devoid of fat and possesses greater proportionate muscle mass than an ordinary human does. Her eyes are specially adapted to withstand high-speed winds which would hurt the average human eye. She possesses a special membrane in her respiratory system enabling her to extract oxygen from the air at high velocities or altitudes.

Peak Human Strength: Due to her body's natural mutation, the Angel possesses greater physical strength than an ordinary human equal to her in body weight and can lift about 500 lbs.

Superhuman Stamina: The Angel's musculature produces less fatigue toxins during physical activity than the musculature of an ordinary human. She can physically exert herself at peak capacity for several hours before the build up of fatigue toxins in her blood begins to impair her. Her physical stamina while in flight is considerably greater. Angel can fly non-stop under her own power for a maximum of approximately twelve hours. Contrary to some reports, she can't make a transatlantic flight solely on her own power.

Superhuman Durability: The tissues of Angel's body are somewhat harder and more durable than that of an ordinary human, though she is far from invulnerable. While she can be injured in ways comparable to an ordinary human, her body is structured to withstand the friction caused by flying at high speeds. She can also withstand impact forces that would severely injure or kill an ordinary human with only mild to moderate discomfort.

Regenerative Healing Factor: The Angel possesses an accelerated healing factor that enables her to repair damaged tissue with much greater speed and efficiency than an ordinary human. She can completely recover from non-fatal injuries such as slash and punctures within a matter of hours and injuries as severe as broken bones within a few days. This ability extends to being transferred by blood, thus she can heal others who come into contact with her blood, provided they have the same blood type.

Flight: The Angel's normal cruising speed averages around 70 miles per hour (112 kph), though she is capable of diving swoops that reach up to 180 miles per hour (290 kph). She can fly at 150 miles per hour (240 kph) without the help of a tail wind for up to half an hour at a time before tiring to an appreciable degree. Though she generally flies beneath the height of the clouds ([6,500 feet)(1981 meters) she can reach a height of 10,000 feet (3000 meters)with little effort. With severe strain she can attain the highest recorded altitude of a bird in flight (African geese at 29,000 feet (8840 meters) above sea level), but she could only remain that high for several minutes.

Retrieved from "https://marvelcomicsfanon.fandom.com/wiki/Angela_Cassidy_(Earth-928)?oldid=255518"
Community content is available under CC-BY-SA unless otherwise noted.