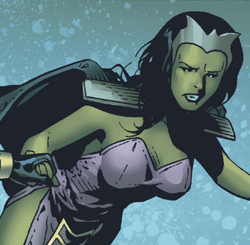 Princess Anelle's early life is the same as that of her Earth-616 counterpart.

After having a child with Mar-Vell, a Kree, and sending him away with her nursemaid, Anelle was sentenced to death by Dorrek VII, the Emperor and her father, for high treason against the Skrull Empire. The Princess was eventually executed.

Anelle is survived by her son Dorrek VIII, who eventually became the costumed hero known as Hulkling and became a charter member of the Young Avengers. Hulkling eventually learned of his heritage from the Super Skrull.

Retrieved from "https://marvelcomicsfanon.fandom.com/wiki/Anelle_(Earth-1010)?oldid=216159"
Community content is available under CC-BY-SA unless otherwise noted.