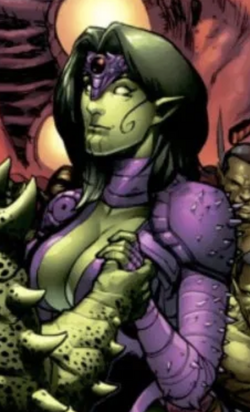 The Heart of the Skrull Empire
Identity

Our baby will end this pointless war, my love. They will be glorious, I'm sure of it.

Anelle is the daughter of the Skrull Emperor Dorrek VII. She has always been hesitant to become involved in the Kree-Skrull War, never quite grasping what it was they were fighting over. Luckily for her, her father would never allow her anywhere near the fighting, as he knew the Kree were not a force to be trifled with.

However, Anelle would later come into contact with the Kree soldier Mar-Vell, who felt the same way about the war. The two fell in love, and went on to sire a child. Their intent was to use their baby as a uniting force between their two races. But Anelle's father did not see it that way. Mar-Vell attempted to help her escape after a Skrull death squad was sent after them, and she ended up being caught in the crossfire, although her unique biology allowed for the baby to survive, and still be given birth to following her death. Mar-Vell then left the baby with their trusted ally, R'Kel, to raise him in secret.

[[Category: In a Relationship with Mar-Vell Characters]]
Retrieved from "https://marvelcomicsfanon.fandom.com/wiki/Anelle_(Earth-101)?oldid=262767"
Community content is available under CC-BY-SA unless otherwise noted.