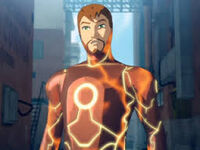 Single
Occupation
High ranking as an agent of New S.H.I.E.L.D. 2099, Leader of Stark International, Leader of Avengers 2099, Mechanical Engineer, Adventurer, Superhero, Inventor, Industrialist, computer technician, philanthropist
Education
Multiple PhDs in Physics Mechanical Engineering and Electrical Engineering[1], chronology technology, quantum mechanics.
Origin
Origin
A grandson of Tony Stark from the future, Tony Stark, created Vortex, an artificial intelligence that was supposed to be used for the betterment of humanity, but it infected the computers of S.H.I.E.L.D. and took control of the entire internet. Vortex then judged that humanity was evil and caused the extermination of all human life on Earth. Andros traveled back to the past to prevent this future from happening. In this happening he equipped his Tony Stark's (Grandfather's) Hyperpulse Mark IX Armor.
Place of Birth
New York, U.S.A.
Creators

As a result of changes in the timeline, the future was saved and because of this, Andros is erased from existence after saying his last words to his grandfather Tony Stark. An alternate reality version of Iron man 2099 wakes up in an alternate distant future.

Andros wakes up in what looks likes a old part of New York in 2099, he quickly check with "JARVIS", his suit's A.I. JARVIS scan timelines for any changes that occur within it. "Andros we are no longer in the 2099 of your birth" before he can ask more, he hears fighting on the main street.  SHIELD the Punishment Police  was hunting down people on the streets. When the police try to executed some of the people by firing squads, he acts. Teleporting in front of the people and blocks the Punishment Police with his Force Field. The Punishment Police send in Waves-spiders to attack Iron Man 2099.  Iron Man 2099 shoots Energy Spheres at them, his ultrapulsors can generate an energy ball that can separate into a few cluster energy balls to attack his opponent. It also knock the men unconscious for about 3 minutes. Iron Man 2099 teleports the people, some are mutants out of the city.

Herod had put a bounty on Iron Man 2099's head and offered mountains of gold cards to the first person to get him. Iron Man 2099 is also hunted by Waves-spiders. He manages to trick or wipe them out. He learns that Stark-Fujikawa Industries, CEO Shudo and Hikaru-Sama were killed. Dr. Ilya Faro is acting head of Stark/Fujikawa now. When Green Goblin 2099 leads a revolt again Herod and President Rogers, who he proves is a fake. Iron Man 2099 joins the Heroes of 2099 take up the fight, along with the mutants. As they fight Waves-spiders and SHIELD troopers to get to the Red House. Doom left Halo City and headed to Washington D.C. Back at the capital, Doom used nanotech robots to take apart the Red House, along with everyone inside, including the fake Captain America, then used the same robots to eat away at Herod, sentencing him to a life of constant pain. Then, after putting Shakti Haddad in charge of the young mutant team, X-Nation, Doom used a hidden teleporter to travel back to Latveria to rebuild his home nation.

America was now free of both Megacrops control and Doom, time to rebuild a nation. Stark-Fujikawa Industries Inc. was taken back by Andros Stark the future grandson of Tony Stark, He changes the name Stark/Fujikawa Industries into Stark International. He makes Michael Rogers Osborn a new CEO along with Dr. Ilya Faro and they start helping the people rebuild.

Andros Stark funds a rebuilds SHIELD 2099 as NEW SHIELD 2099 ran by Green Goblin 2099 but bases it on Nick Fury's Shield of the 21st century. Agents to protect the world. This SHIELD help relation with mutants and humans to get better. Also stopping Doom from trying to rule the world or America again and fighting new threats. Recruited a new hero called The Mandarin 2099 and hired Matt Axel and Jillian Wong. Also Shield had many heroes and mutants.

His armor enables him to fly, teleport and time travel, though he has only a finite amount of time jumps. He notably has many defensive systems, capable of both shielding and safely taking out combatants without causing them permanent harm.

His Hyperpulse Mk 9 Armor gives him superhuman strength of an unknown level.

Andros is arguably naïve, and despite coming from the future, he doesn't predict the effect of his actions too well. Not understanding the present, he lets himself be manipulated.

Transportation: None known.
Weapons: Andros possesses repulsor-like weapons systems. His ultrabeam is strong enough to cripple the S.H.I.E.L.D. Helicarrier with a single blast.

He persistently refers to Tony as "grandfather", much to the latter's irritation.

Retrieved from "https://marvelcomicsfanon.fandom.com/wiki/Andros_Stark_(Earth-928.2)?oldid=277860"
Community content is available under CC-BY-SA unless otherwise noted.