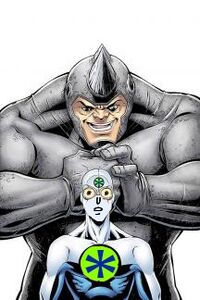 Single
Occupation
S.H.I.E.L.D. operative, Adventurer
Education
High school diploma, S.H.I.E.L.D. training
Origin
Origin
Andrew Cororner was a store clerk who witnessed a robbery using experimental technology stolen from Stark Industries. He tried to stop them but was hit with a ray that gave him the ability to replicate others powers and abilities. Donning a colorful costume and calling himself Obtainer, he set off to fight crime.
Place of Birth
New York City, New York
Creators

Andrew "Drew" Cororner was a store clerk in New York City who witnessed a group of robbers using experimental technology they had stolen from Stark Industries. He attempted to stop them, but was blasted with a ray from a prototype device. The robbers left, thinking he was dead. Cororner was actually alive, albeit his physiology had been altered. Discovering he had the ability to replicate (or obtain, as he would come to call it) the powers and abilities of others after appropriating the medical knowledge of the doctor helping him in the hospital, he donned a sweatshirt and goggles and tracked down and defeated the robbers. The device that gave him his powers was destroyed in battle. Dubbing himself "The Obtainer", he decided to fight crime after making a more appropriate costume.

At some point in his career, Cororner became an agent of S.H.I.E.L.D., though only using this jurisdiction to attempt to scare criminals. He would also obtain an advanced costume from Mr. Fantastic with an artificial intelligence called SUIT.

Obtainer would be partnered with Deadpool on a mission to stop a particle accelerator that was being sabotaged by a group of rogue S.H.I.E.L.D. agents. The two succeeded and, although not a fan of his personality, Cororner would find that the mercenary's powers and abilities were very useful, deciding to utilize them on a regular basis.

Enhanced Physiology: Cororner's powers come from his physiology being affected by a blast he was hit with produced from a prototype Stark Industries device that is unable to be replicated.

Deadpool Powers: Cororner has decided to keep the powers of Deadpool on a regular basis.

Medical Knowledge: The very first "obtainment" Cororner ever made was unintentionally obtaining the medical knowledge of the physician treating the injuries he sustained when he gained his powers in the first place. To this day, he still remembers everything he learned, given the importance of that day and the instability of his powers at the time.

Billiards Expertise: The doctor who treated Cororner was also a skilled billiards player in his spare time, meaning that the Obtainer is as well.

Good Memory: The powers Cororner can utilize greatly depend on what he can remember and so to best utilize them, he has trained his memory with help from SUIT and the brain regeneration he has obtained from Deadpool.

Deadpool Abilities: Cororner has decided to keep the abilities of Deadpool as well.

Cororner engages in moderate regular exercise. He is capable of "obtaining" the strength of almost anyone, even up to the Hulk and possibly stronger.

Weakness Inheritance: When Obtainer "obtains" certain powers, he may "inherit" weaknesses that come with the powers, such as Wolverine's weakness to loud noises.

Irresponsibility: Obtainer can be very irresponsible with his powers. Tony Stark once said to him: "The only reason you can't replace every hero on Earth is because you'd sooner juggle cars then throw them at villains."

Equipment: Obtainer Suit: Obtainer wears a tactical full-body suit made of unstable molecules given to him by Reed Richards. It is immune to the powers of the Fantastic Four, Avengers, X-Men, and "pretty much anything else [he] can think of". This includes gunshots, puncture wounds, burns, exposure to space, explosives, and energy blasts as well as falls from great heights and direct blows from the Hulk. The suit's goggles provide telescopic vision, omni-directional scanning, plasma blasts capable of melting through steel, and a camera. The gloves have grappling lines within them. The suit contains an artificial intelligence designed by Richards called SUIT (Supervisor, Upgrade, Intelligent Technology), which provides Cororner with his own vitals, a database of powers and abilities he has collected and from whom, the powers and abilities of those in a five-mile radius, and S.H.I.E.L.D. databases.

Retrieved from "https://marvelcomicsfanon.fandom.com/wiki/Andrew_Cororner_(Earth-4577)?oldid=279810"
Community content is available under CC-BY-SA unless otherwise noted.