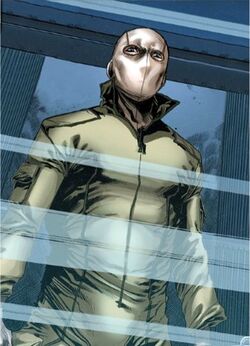 Bald, Variable
Unusual Features
The Chameleon's head and face are smooth and featureless when he is not actively mimicking someone.
Status
Citizenship

What's wrong сударыня? Were you lookin' for someone else?

Born between the late 37th and early 38th Century as a Russian citizen named Anatoly Smerdyakov but later raised in the United States of America due to the Dark Ages of the Heroic Era, Anatoly is the distant descendant of the infamous Dmitri Smerdyakov, the former Heroic Age villain known as the Chameleon. Finding out his status as a mutant early as in his toddler years, Anatoly had a power-dampening chip artificially implanted on his nape by his own parents, fearing that the rest of the strict and extreme Smerdyakovs would consider him as a deviant, an abomination to the family tree and would possibility even go to great lengths of having the still innocent, mindless toddler "legally" killed by his own anti-mutant relatives. Although Anatoly's older sister Aleksandra was an utmost caring and morally-accepting individual, she could only support his brother by reluctantly keeping the mutant secret from Anatoly, for his own safety, until they've fully grown up, and tell him once it is time for him to know the truth.

As a result, Anatoly was forced to be raised by his loved ones not immediately knowing that he was someone who could eventually harness limitless possibilities. In his late adolescent to early adulthood years, Anatoly was continuously trained to be a highly-skilled combatant and was later sent back to the warzone areas of Russia, where he became an intelligence spy and achieved the rank of captain as he willingly joined the Russian Armed Forces at some point by the end of the 39th century. Throughout his military career, mostly in Saint Petersburg, Russia, for half a decade, fighting against the notorious extremist organization known as the Soviet Sons of the Motherland in the Century War for the Federation of Russia, also came the time Anatoly's eyes had opened as he discover his true nature during his near-death experience.

At some point in one of his most important missions, the one that would eventually be his last, he was shot in the nape by an enemy sniper, subsequently destroying the implanted chip which had always been depowering his mutant powers, finally igniting his mutation for the very first time in years. By that moment, Anatoly already thought it was his last stand, although it was only the start of his newfound journey as a mutant in one of the darkest timelines for his own discriminated and somehow gradually decreasing kind. Following his near-death experience, Anatoly only became more traumatized as he witnessed more of his fellow troops get slaughtered by a back-up unit which was called upon by the extremists.

As fear comes into Anatoly's senses, his own body unknowingly responded into his impulses and stimuli, finally triggering his main mutant power. In consequence, Anatoly suddenly took in the form in one of the already fallen extremists, who was a high-ranking officer, much to his surprise for what was going on. Hesitant on what to do at first, he pulled himself afterwards and knew that he had to use the ability for his own advantage to survive the ensuing ordeal, which he did after the deceased general's comrades mistook him for their commander and rescued him back to their secret headquarters within Saint Petersburg. Acting as the fallen general, Anatoly secretly contacted his allies, giving away the coordinates to the secret main headquarters and even gave them instructions on how they would infiltrate it without losing too much manpower and equipment on their side.

Because of his heroically fearless actions, Anatoly led the entire Russian Armed Forces to eventually win the war against the Soviet Sons of the Motherland for the next seven days, marking a fair and worthy victory for the Russian Republic, as the leaders would later sign a peace treaty to end the Century War for the Federation of Russia, once and for all. After the peaceful victory of the Russian Republic, Anatoly remained in Russia for the next two months, right until another, far greater threat came to his family back in the United States, leading Anatoly to immediately fly to his former residence in America once again to try and rescue his family from the impending war of Kang the Conqueror against those who he deemed would ruin his quest of conquest of cleansing the world. As Anatoly arrives in the country, now in ruins, he could care less what consequences may occur once his family knows that he has found out about his true mutant nature, signifying how much he really cared for them.

To maintain control over the following countries he has conquered, Kang and his minions of death sought out almost every rogue superhuman (e.g. mutates, mutants, even Inhumans) in those following countries and forced to serve him as his enforcers, and killed the ones who refused to do so. Reading the whole list of individuals who were slain by Ravonna and the lieutenants under Kang's extreme principle would go on for ages, although it included the famous mutate gunslinger Bret Colby and slaughtered his team, which were allegedly the future counterpart of the prime Ultimates, with the exception of Spider-Man of 3099, who allegedly was able to escaped back into hiding into a secret resistance base, despite getting critically wounded by Renslayer.

Due to the 40th century Spider-Man's ultimate survival from the resistance purge, the latter gave a new spark of hope for the rest of the resistance's future, to which they were able to plan a new tactic and strategy to create new destinations to attack, reclaim and free more bases in their long-time war against the Empire of Kang. As one of the greatest strategists and tacticians in his prime, Anatoly was eventually inspired by the sacrifice of other individuals who died for the cause, including the great sacrifice of his own teenage nephew, who heroically died at the hands of a brutal and merciless Kang droid, after saving a group of stray depowered mutant children to hide into the safety of a secured resistance base. In the days that followed, Anatoly finally accepted the resistance's offer to join them in their war against the Empire of Kang, in the days thereafter they found out that Kang disappeared and handed his reign and power to his right-hand woman Ravonna Renslayer, the more infamous Terminatrix.

Once Ravonna was informed by the city watchers of the empire that one of their hidden headquarters in Manhattan would be taken over by the heroic mutiny, she and her commanding forces made it to the ghost borough to prevent the resurgence's attempt. As they arrived to the dead borough, Ravonna and her allies were ambushed by the resurgence, led by the Spider-Man of 3099, although it was revealed to be Anatoly, as he volunteered to be the leading commander of the ambush to take the place of O'Hara by also taking on his appearance and suit, while he recovers from his injuries. In the ensuing attack, the resurgence were able to take out most of Ravonna's soldiers due to their strength in numbers and Anatoly's tactics, apparently signalling the first significant victory for the mutiny against the powerful Kang Empire.

Unfortunate for them, Ravonna injected herself with a concentration serum at a moment of desperation, rendering her to a maximum concentration state before finally taking on the enemy forces on her own, while her remaining allies try to cover her. Combined with her enhanced concentration and superhuman skills, she outsmarted every single rebel who fought her, giving her the ultimate advantage to slay each and every one of them in the process. Due to Ravonna's last resort, the mutiny faction was forced to retreat, with the exception of Anatoly, who decided to stay and take down Ravonna and avenge his fallen comrades.

The two solely battled in the final moments of the seemingly-failing ambush, although it still ended with Ravonna as the victor, who used her last to trap the aggressive web-slinger as they entered a demolished building. The defeated hero was then revealed to be Anatoly himself, in the form of O'Hara (she noticed the difference through a mutant-scanning device), a late descendant of the original heroic age former villain. Sarcastically questioning Renslayer whether she was looking for someone else, the latter could only look at him in disappointment. Feeling a little bit of disappointment to who she just defeated instead of whom she actually expected, she decided to spare his life, though Chameleon still died shortly afterwards when most of the structure above him collapsed, burying him alive. In his last moments, Anatoly could only think of the great relief that his surviving family would still be safe and sound at the hands of the Resistance against Kang, and realize that he would finally be with his parents as he closes his eyes, and exhales his final breath.

Homo Superior Physiology: Chameleon's superhuman powers have genetically developed innate, officially classifying him as a mutant. His epidermis and skin pigmentation have been surgically and mutagenically altered by a serum so that he can take on the appearance of any person at will. He also wears fabric made of memory material that responds to nerve impulses and can appear to be what ever costume he wishes to be.

Retrieved from "https://marvelcomicsfanon.fandom.com/wiki/Anatoly_Smerdyakov_(Earth-6164)?oldid=256332"
Community content is available under CC-BY-SA unless otherwise noted.