Marvel Fanon
Register
Don't have an account?
Sign In
Advertisement
in: Characters, Templated Articles, No Dual Identity,
and 38 more 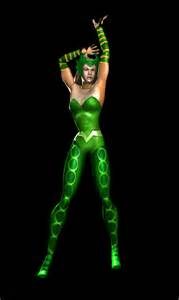 Little is known about the Enchantress's life before the formation of the Masters of Evil. It can be assumed to be similar to her mainstream counterpart.

Enchantress was one of the lieutenants in Doctor Doom's Masters of Evil. The only action she's done in the field was guard Balder with Executioner.

Amora's spells derive their potency from Asgardian sources (such as power objects or entities), and thus are most potent when used in the dimension of Asgard itself. A prolonged absence from Asgard tends to diminish her powers altogether, though they never fade completely. Although she has a superhuman physique, Amora has little to no experience in hand-to-hand combat, typically relying on minions to fight for her. The Enchantress cannot access her spells with her hands bound and her mouth gagged. Previously cast spells like her enhanced aura of seduction, however, can continue to function. She was once able to seduce a Frost Giant with her gaze alone while bound and gagged.

Equipment: In the past, the Enchantress has made use of advanced scientific equipment created by her allies. She is by no means an inventor or technology expert, but she is quite intelligent, and able to operate such technology in a basic and effective fashion.
Transportation: Teleportation (both between dimensions and within dimensions)
Weapons: On occasions, the Enchantress employs various mystical artifacts, potions, and power objects at her disposal.