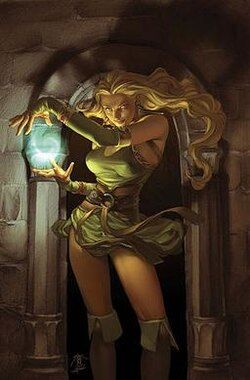 Oh, couldn't you just die for me?

Amora has always been quite adept at Asgardian sorcery. She was raised in the same coven as Queen Freyja, and always looked up to her, believing that she, too, would one day be royalty.

This unhealthy obsession led to Amora becoming enamored with Freyja's son, Thor. While Thor did find himself attracted to her, he became appalled after discovering Amora had bewitched him into falling in love with her. From then on, she became bitter and scorned, believing that if she could not have the throne, she would tear it down.

She went on to encounter the decorated Asgardian soldier, Skurge, who she could sense was weak-willed. She seduced him and was able to successfully enslave his heart into becoming completely devoted to him. Since then, he has become her Executioner, doing all of Amora's dirty work for her, which led the two of them to quickly become some of the crown's fiercest enemies.

Over the years, Amora ended up growing quite close with Thor's mischievous brother, Loki. The two of them often found themselves working together to scorn Thor, and eventually, his mortal allies the Avengers. She even temporarily joined Loki's secret Cabal of ne'er-do-wells on Earth.

However, things changed after the Great Asgardian War. Odin's brother, the Serpent, had returned, and was wreaking havoc on the Nine Realms. Unwilling to see her home reduced to ashes, Enchantress and the Executioner aligned themselves with Asgard's forces to fight him off. In the process, however, the Executioner ended up sacrificing his own life to save Amora. Holding him in her arms while he died helped to humble the Enchantress, leading her to pledge her loyalty to King Thor and the surviving Allmother, to help rebuild Asgardian society on Midgard.

Retrieved from "https://marvelcomicsfanon.fandom.com/wiki/Amora_(Earth-101)?oldid=250169"
Community content is available under CC-BY-SA unless otherwise noted.