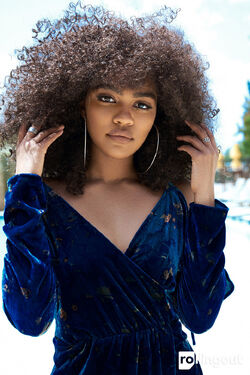 Okay, y'all really need to chill out!

Khione was born Ameisha Trinidad Watkins to Lynn and Martin Watkins, the second of two daughters. She along with her older sister, Tranika, lived in the lavish neighborhood of Bel-Air in Los Angeles due to their father's career as a successful lawyer and their mother being a scientist and doctor, learning the biology of mutants and caring for them when in need.

By the time she had reached the age of four, Ameisha's powers began to surface as her bed was frozen and covered in snow, which frightened her a little bit, not to mention her hair changing from black to white and her brown eyes changing to blue. It caught the attention of her mother and sister. After being examined by her mother, Ameisha was told that she was a mutant and that brought more fear within her. Since then, her powers were kept secret from the public.

By the time she had turned seven, Ameisha and her family moved to New York City, where they stayed in the nicer parts of the city. As Ameisha attended school, she started to encounter some school bullies who picked on her because of her unusual hair and eye color, and it endured until she reached the fifth grade, when she was getting picked on by seventh graders until she finally snapped and unleashed her ice powers in front of the entire school. This caused outcry from many parents and she was barred from coming to school, which angered her parents, igniting harsh confrontation.

The incident caused Ameisha to hate herself because of her powers and she believed that all of the kids would hate her because of them. However, her parents were visited by Professor Charles Xavier and was offered an invitation to the Xavier School for Gifted Youngsters, which Ameisha reluctantly agreed to.

In her first year, Ameisha was a bit skeptical due to her ice powers, but she soon discovers other mutants like her and they all welcomed her in open arms. But she still felt insecure due to her powers and she began to distance herself until she meets veteran X-Man, Bobby Drake a.k.a. Iceman, who explained to her his struggles with his own ice powers and how it made him the person he is.

Hearing his story, Ameisha began to accept her powers as she started to make friends and master her powers such as projecting ice projectiles and construct shields and weapons, prompting many of her peers to dub her in many names such as Ice Girl and Ameisha Frost until Iceman gives her the name 'Miss Khione', naming her after the Greek goddess of snow. Eventually, Ameisha dropped the 'Miss' and just referred to herself as Khione.

After graduating from the Xavier Institute, Ameisha decided to fight as a vigilante as well and along the way, she got romantically involved with Ryouichirou Yoshida, the son of Shiro Yoshida, a.k.a. Sunfire, and married him eventually.

Cryokinesis: This ability allows Ameisha to project and manipulate snow, ice, and cold temperature developed from her X-Gene. She even has the advantage to freeze any liquid into super-hard ice and even project ice bolts and even construct ice weaponry and shields. It is also shown that she can even create blizzards and can fly by charging the ice energy within her whole body.

Aside from her ice powers, Ameisha often spends her time designing clothes for she is an aspiring fashion designer.

Equipment: Her X-suit she designed herself.
Transportation: None
Weapons: No official weapons. The weapons she uses are created from her ice powers.

Retrieved from "https://marvelcomicsfanon.fandom.com/wiki/Ameisha_Watkins_(Earth-7090)?oldid=258721"
Community content is available under CC-BY-SA unless otherwise noted.