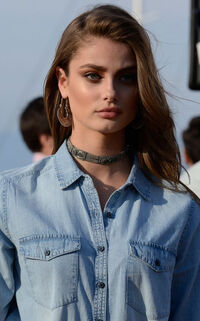 Blonde, Brown
Unusual Features
Amara inherited white eyes from her father, but due to her powers, she is able to change certain characteristics.
Status
Citizenship

Whether I was born in the hands of a god or raised by a mortal, my home is where I sacrificed the most for the ones I love.

A thousand years ago, Amara Nadine Matthews (Klarr) was born on Earth when the Celestials forced the gods to stop intervening with humanity's development. Amara's mother, Gaea (one of the Elder Gods) disobeyed the Celestial's commands and mated with Cul Borson, the God of Fear. This was due to Gaea's will to give birth to a daughter who would take responsibility for her duties, caring for the planet and its people, however because of certain rules, Amara was put to sleep in a secret chamber located in Asgard, frozen in time until it was safe for her to live on Earth.

Without destroying the Earth, the Celestials left and Amara was sent to Earth years later to be raised by a loving, mortal family, or so was planned. Amara was found by an orphanage and later on adopted by a married couple who seemed to be stable at the time, but no one knew about their incredibly abusive behavior.

For six years, Amara was nameless, forced to do things against her will, raped and beaten. Her father at the time was a narcissist, while his sole purpose for adopting Amara was to have full control over her, making her satisfy his needs, serve him and constantly abuse her verbally and physically to become the person he wanted her to be. Many times, Amara was set to carry out robberies, deal hallucinogens and seek out men who were willing to pay her for sex. Amara had no evidence of her past, only knowing that she was found in the middle of a soccer field, with no identity whatsoever. Over time, she was convinced that her parents abandoned her, either leaving her to die or be found. It didn’t matter, the world was an evil, cruel place where the unwanted remained useless and a waste of space till their deathbed.

One day after earning a lot of money for dealing PCP, Amara came home to a gun pointed against her head. It was one of the competing drug dealers who had threatened to pull the trigger if they didn’t hand over all their earnings. Thinking it was the right move, Amara attempted to disarm him, which lead to her to getting shot in the thigh. As the gun was triggered again, being pointed at her head, the bullet began to move in slow motion while Amara was able to focus on it, stopping it in midair. At the time, Amara thought it was just a force of something abnormal wanting to help her. Completely terrorized, the dealer took off empty handed while police sirens began to ring in the distance.

During questioning, Amara was so solely focused on protecting her parents that she put them under a positive light, but the various bruises and scars on her body gave the police every reason to assume she was being abused, taking her away from them. Amara was once again put into an orphanage, waiting for someone to take her in. Now halfway to the age of seven, Amara was adopted by a wealthy family carefully selected by the police, consisting of two young parents and a boy three months older than her. They welcomed her with open arms, naming her Amara as she was enrolled in the Dalton private school to attend her first grade in hopes that she would be able to cope with the loss of her kindergarten year.

In the beginning, Amara had great difficulties fitting in with others and learning what was socially acceptable, developing a reputation of an awkward kid, but education wise, she was a natural. She understood all the content when first presented to her, being praised as the most gifted student in the grade. This was because she believed that by being given a second chance to make her life worth something, she was going to do it right, although little did she know about the extra boost her abilities provided her. Her maturity progressed so intensely at such a young age because even though she was frozen in time for over a thousand years, her brain was still able to develop, but gradually.

Though Amara was very intelligent, her social life never seemed to develop, causing her to be bullied and outcast by all her classmates. She would usually sit alone during lunch, but occasionally, her brother Axel would invite her to sit at his table. Amara and Axel grew very close as siblings, having a lot in common and sharing a lot of memories over time. When Amara’s freshman year arrived, her parents made a consideration and transferred her to a public high school in order to give her another chance to start over in a more normal environment.

Now enrolled in the Midtown High School, Amara changed completely, adapting to the behaviors of others and socializing with bigger crowds, causing her to be a praised socialite. Privately, Amara was an honors student, showing great interest in her subjects. Amara's only true friend was Peter Parker, her childhood best friend. Even though hanging out with Peter may have hurt her reputation, she didn’t care, because for once there was someone who truly appreciated her for the way she was.

Though telekinetically stopping a bullet in midair was way out of the ordinary, Amara never seemed to acknowledge the fact that it truly happened, and acted is if it was a hallucination. The first time Amara was convinced about her abnormal abilities was when she mistakenly cut herself while cooking, the wound healing within seconds. As for her other abilities, Amara's curiosity forced them to rise above the surface which included lab experiments, random trials and guessing.

Asgardian/Elder God Hybrid Physiology: Biologically half-Asgardian on her father’s side and half-Elder God on her mother’s side, Amara possesses powers from both sides, although the Elder God powers have enhanced Amara's Asgardian characteristics powerfully.

Through her years of living on Earth, Amara's been recognized by some of her abilities.

Gray Hood is classified top 100 along with her mother, giving her the ability to lift over 100 tons.

Like most superheroes, Amara can be weakened by certain techniques and even by her own abilities.

Equipment: Although Amara mostly relies on her abilities, the equipment she uses are made for communication purposes.

Avengers Identicard: A credit-card sized gadget given by Tony Stark for the identification of all Avengers.

The abuse Amara experienced constructed her personality. Because her guardian at the time was narcissistic, all he wanted was to have full control over her, which truly hits the jackpot for any narcissist, like an ultimate win. Amara realized quite fast that she was only there to serve him and satisfy his needs. From the parenting she received, she believed that she had to suit the personality intended for her, meaning that she didn’t develop her own personality until she was founded by the police.

Amara is a very anxious person, paying close attention to all her actions and hopes to please everyone. Amara can suffer from panic attacks when things go wrong, for she is still accustomed to being punished after disobeying, failing or making mistakes. When failing, Amara can carry intense shame, leading her into a deep state of depression difficult to overcome. She believes that the opinions of others define her progress.

“You’re only as good as I say you are, and you’ll be loved only if you’re fully compliant with my wishes"

Amara hides this side of her quite well because she’s used to constructing a personality different from her own, mostly because she doesn’t have one. When as her usual self in the presence of others including her family, Amara is very charismatic, sarcastic, rebellious and quite often devious. She likes to get under people's skin, although it is evident she believes in peace and equality, wanting to do what's right. When as Gray Hood, citizens recognize her as a swift hero, getting things done and getting them done well, only because she’s used to serving people and following instructions. She's also seen as very loyal and puts herself ahead of everyone to make sure they remain unharmed, which is one of her prominent traits.

Amara is emotionally numb when it comes to affection and empathy. She is extremely organized, worries a lot, moody, inhibited, she has low-self esteem and has a difficult time letting people into her life. Even though she was abused, Amara handles stress and complications very well, staying calm and finds solutions promptly.

When hiding away the reality behind her constructed personality, Amara is very energetic, talkative, enthusiastic and forgiving (only to stray away from conflict). Amara is also ingenious and a deep thinker, having strong opinions and believes strongly in things.

When in combat, she tends to value what she leaves behind and chooses her attacks carefully. This makes her sometimes difficult to cooperate with when it comes to breaking rules.

In school, though in the beginning she was a loner and outcasted by her peers, Amara quickly became affable after transferring to the Midtown High School, where she once again constructed a personality that people found captivating and likeable. She had the ability to put a smile on peoples faces, her approachable nature pulling everyone in.

Her change in personality was very useful when it came to her identity as the Gray Hood, because no one could ever correlate the Amara Matthews everyone knew to the serious and dark Gray Hood.

Gray Hood is seen as someone who always defeats the bad guys, no matter their size or strength. She is known as a very swift and clean fighter, intelligent strategist and talented mind, gaining the trust of the people of New York and around the world. Though in the beginning she was seen as a threat because of her dark nature, citizens got used to her disguise, calling her the "Dame of the Night".

Because Gray Hood works alongside the New York Police Department, her and Spider-Man are quite opposites. Though Gray Hood may be a disguised vigilante in the eyes of the public, she immediately revealed her identity to the department in order to gain their trust. Gray Hood only fights when she is ordered to, standing more as a weapon than a free spirit like Spider-Man.

The abuse Amara experienced constructed her personality. Because her guardian at the time was narcissistic, all he wanted was to have full control over her, which truly hits the jackpot for any narcissist, like an ultimate win. Amara realized quite fast that she was only there to him and to satisfy his needs. From the parenting she received, she believed that she had to suit the personality intended for her, meaning that she didn’t develop her own personality until she was founded by the police.

Amara is a very anxious person, paying close attention to all her actions and hopes to please everyone. Amara can suffer from panic attacks when things go wrong, for she is still accustomed to being punished after disobeying, failing or making mistakes. When failing, Amara can carry intense shame, leading her into a deep state of depression difficult to overcome. She believes that the opinions of others define her progress.

Retrieved from "https://marvelcomicsfanon.fandom.com/wiki/Amara_Matthews_(Earth-616)?oldid=234094"
Community content is available under CC-BY-SA unless otherwise noted.