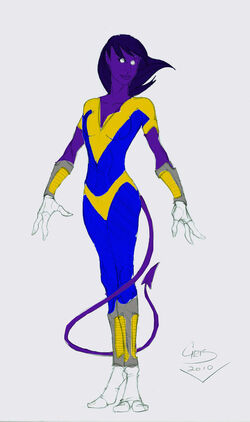 On Earth-1175, Nightcrawler and Kitty Pryde met each other as on Earth-616. However, when they founded Excalibur, they began having feelings for each other. They began a secret relationship that no one else knew of. It got messy when she started dating Colossus and Nightcrawler at the same time. So when Amanda was born she went public with it, and Colossus was deeply hurt. She was raised under the assumption that her mother had always been with only Nightcrawler.

When she was little, she was raised in a humorous household. Nightcrawler always loved joking with her, and they commonly had teleporting races. She was raised in a normal house, away from the X-Men. But soon after, Kurt lost his acting job, and her parents both quit their jobs and joined the X-Men, moving in with them. They hated this, as they liked living a normal life. So Amanda began training furiously to be an X-Man, in hopes of making her parents proud. She was graciously accepted onto the team.

When the Skrulls attacked, Shadowcrawler formed a plan. She only used her teleporting powers, and was easily captured and sedated. However, she escaped and used her density shifting powers as well. She made some headway, but she was again captured and restrained. When the 2nd team came, she was freed, and did well alongside her new recruits. However, during the battle, she developed a new power: darkness manipulation. She created many black clouds that the Skrulls disappeared into. After the battle, she needed bed-rest due to her headache. These powers would be hard to develop, but she could add the powers of Cloak and Darkstar to her repertoire, with enough training. And something else came of the battle: the stress made Shadowcrawler bisexual.

Teleportation: Amanda can teleport herself and some additional mass by traveling through the Brimstone Dimension, and back to Earth. She mostly has line-of-sight teleporting, which she can do by instinctively turning intangible when she teleports. She cannot control this. But when weakened, she can only teleport approximately a mile.

Wall-Crawling: She has micro-suction discs on her skin allowing her to walk on walls.

Invisibility: Shadowcrawler turns invisible in shadow due to her skin, but her teleportation aura generates shadow in which she appears invisible. Additionally, she can cloak herself from electronic or visible detection.

Prehensile Tail: Amanda has a tail strong enough to lift a human.

Superhuman Agility and Reflexes: Shadowcrawler is capable of bending further and longer than most people can.

Intangibility: Amanda can separate her molecules enough to allow objects to pass through her. This also allows her to walk on air and disrupt electronics.

Darkforce Manipulation: Amanda has the latent ability to manipulate the Darkforce, the exact nature of this is yet unknown.

Retrieved from "https://marvelcomicsfanon.fandom.com/wiki/Amanda_Wagner_(Earth-1175)?oldid=259065"
Community content is available under CC-BY-SA unless otherwise noted.