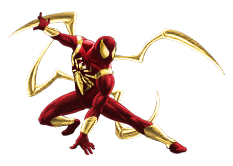 Amadeus Cho's early life is the same as that of his Earth-616's counterpart.

Amadeus Cho grew to idolize Peter Parker, a senior in his high school. After Amadeus approached him in the Midtown Science Fair and Peter's inability to operate the Iron Spider armor properly, the young boy was chosen by the superhero to be the new Iron Spider as a member of the Spider-Initiative.[1]

Super-Genius Intelligence: Amadeus Cho’s mind operates like a hypercomputer, capable of rapidly and without mechanical aid perform an infinite number of unimaginable complex and simultaneous calculations, in his mind with minimal stimuli. He can quickly, simultaneously and perfectly analyze multiple information streams (e.g. threat assessment) and rapidly respond to changing tactical situations, by identifying the variables and quantum possibilities in any situation, and he uses this information to adjust the outcome to whichever is most favorable to him. Because his mind operates like a hypercomputer; he can process information quickly and this gives him a hyper-accelerated learning aptitude. He also possesses limitless information storage and retrieval, enhanced pattern solving/recognition, extremely high perception, and observational skills, perfect deductive/reasoning skills and investigative skills, superhuman strategic/tactical analytical skills, and an eidetic memory (meaning that he never forgets anything and has perfect recall).

His hyper mind also makes him one of the most intelligent people on the planet, ranking him somewhere in the top ten smartest beings alongside Reed Richards, Tony Stark, Dr. Doom and Hank McCoy. It is believed that Cho is actually more intelligent than some immortals and that he sees patterns better than 99.999999993% of people on Earth.

Skilled Hacker: He is a skilled hacker.

Amadeus possesses the strength of a teenager that routinely engages in minimal exercise.

Performing mental calculations in rapid succession costs him immense amounts of energy leaves him exhausted and famished, requiring him to consume large amounts of food thereafter.

Retrieved from "https://marvelcomicsfanon.fandom.com/wiki/Amadeus_Cho_(Earth-1010)?oldid=220831"
Community content is available under CC-BY-SA unless otherwise noted.