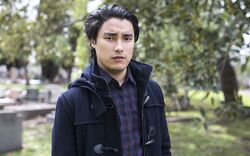 Please, the concept of brawn is so 2-Dimensional. I'm much more fascinated with brains.

Amadeus Cho is the son of S.H.I.E.L.D. Nurse Helen Cho. He was accepted into Empire State University when he was 14-years-old, and quickly became bored with college life. While there, however, he did briefly meet and become friends with Peter Parker.

He came to decide that he had much more important things to do than waste his life at ESU, and ended up being recruited by S.H.I.E.L.D. after being recommended by his mother. He was stationed at the lab in the Triskelion, where he was tasked with studying alien artifacts collected by the organization in an attempt to reverse engineer them.

Retrieved from "https://marvelcomicsfanon.fandom.com/wiki/Amadeus_Cho_(Earth-101)?oldid=249930"
Community content is available under CC-BY-SA unless otherwise noted.