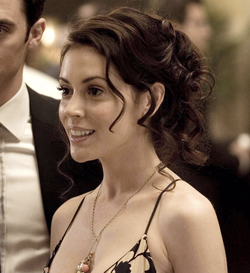 You're looking at this all wrong, Reed, as usual.

Alyssa Moy is a gifted scientist who was working at California Tech at the same time as Reed Richards. The two became very close, and formed a brief romantic relationship. They eventually concluded that their personalities did not match up well enough to remain together, but decided to stay scientific partners.

She eventually decided to accompany him to Project: Pegasus, where they began to study cosmic radiation. Alyssa initially planned on joining the expedition into space, but opted against it after she became engaged to a fellow scientist working on the project.

When Reed and the others returned from space, having mutated from the cosmic radiation, Alyssa threw herself into helping them learn to control their powers. Eventually, this formed a distance between her and her fiance, which led to them going their separate ways.

She then began to consider that she had become too dedicated to the Fantastic Four, and decided to go about living her own life. For several years she operated on her own, helping provide important scientific breakthroughs to the world at large. Eventually, she was roped back into the fray when Reed and Susan Storm asked her to join the Future Foundation as a science teacher.

Retrieved from "https://marvelcomicsfanon.fandom.com/wiki/Alyssa_Moy_(Earth-101)?oldid=250003"
Community content is available under CC-BY-SA unless otherwise noted.