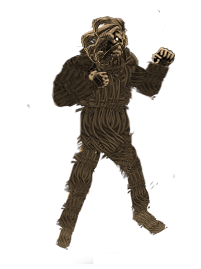 Single
Origin
Origin
Parasitic Inhuman which can possess the bodies of the dead, trapped on the planet Maveth for fear of its great destructive powers. Its imprisonment inspired the formation of Hydra which ultimately succeeded in releasing it back to Earth.
Place of Birth
Wakanda
Creators

It was in that moment, that my world changed forever. Kree Reapers brought me back to their ship and began their experiment. I didn't know it then, but the Reapers were using their own Kree blood to transform my DNA. Once they changed what I was, the Reapers took the final step, fulfilling the promise of what I would become.

Hive's origin is the same as that of his Earth-199999's counterpart, except that in this reality he is Wakandan.

During Kang's invasion, Fixer was one of the many time-displaced beings and met Hive, Giyera, Lucio and Gideon Malick. The parasitic Inhuman told Fixer about his future demise at the hands of Baron Zemo and offered him to join Hydra. However, Ebersol refused and attacked the Inhumans.[1]

Hive recruited Lineage as one of his Inhuman followers. Alveus noticed how Nobili was unafraid and didn't need to be infected. Soon, the Inhumans were approached by both S.H.I.E.L.D. and the newly formed Thunderbolts. While battling Satana, Hive was surprised that she could destroy some of the parasites that make up his body. Afraid, he ordered his followers to retreat.[2]

Hive's death is similar to that of his Earth-199999's counterpart, except that he was alone on the Quinjet.

Hive is an Inhuman that achieved its genetic potential after undergoing Terrigenesis, granting it incredible superhuman powers. The transformation was physical, arguably the most drastic physical change ever seen in an Inhuman as it transitioned from a human to a parasitic superorganism composed of innumerable individual parasites.

Hive is somewhat limited by the physical ailments of its host bodies and must eventually find a replacement host when decay sets in. For example, when it was possessing the body of Will Daniels. As Will's leg withered to bone, this slowed Hive down and eventually led to Hive having to find a new replacement host.

Retrieved from "https://marvelcomicsfanon.fandom.com/wiki/Alveus_(Earth-1010)?oldid=220830"
Community content is available under CC-BY-SA unless otherwise noted.