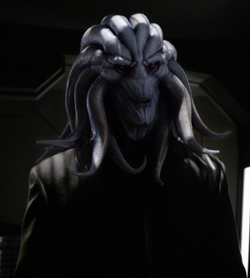 It, Will Daniels, Grant Ward, Alveus the Great, Hive the Terrible
Identity

Single
Occupation
Head of Hydra, Leader of the Inhuman Revolution Front
Education
Knowledge Amassed from Dozens of Hosts
Origin
Origin
{{{Origin}}}
Place of Birth
The Location That Would Eventually Be Known as Central America
Place of Death

You have dedicated your lives to me. Your human lives. I am grateful for your sacrifices... they will not be in vain.

During the dawn of human history when a faction of the Kree government came to Earth in order to experiment on humans, their first test subject was a Mayan hunter-gatherer named Alveus. Alveus became the first Inhuman, and his abilities allowed him to survive for centuries so long as he transfers to a new human host every few decades, as well as emitting hives that sway other Inhumans to serve him as loyal subjects.

Eventually the Kree left the Earth, and Alveus was left to try and rule the world. But eventually, a cadre of both humans and Inhumans turned against him, and used an abandoned Kree monolith to send him to the planet Maveth, where he was exiled for the next several centuries.

However, a cult formed with the sole intention of bringing the world to its knees so that Alveus could return to rule a united planet. This cult called themselves Hydra, and fashioned a logo to resemble their fallen leader. Over the years, Hydra would continue to send human sacrifices through the monolith in order to provide Alveus with sustainable hosts, but were never able to figure out how to bring him back.

Eventually, the problem was solved by the scientific minds from within S.H.I.E.L.D. Hydra then stole their plans and sent in a retrieval squad led by Grant Ward. But they were followed by S.H.I.E.L.D. Agent Phil Coulson, who ended up killing Ward and making it back with Leo Fitz, who had been abducted to lead the Hydra squad.

But Alveus was not defeated. He was able to inhabit the body of Grant Ward and escape through the portal just in time. He then rendezvoused with Baron Strucker, the head of Hydra, and began amassing an army of Inhumans, including the S.H.I.E.L.D. Agent Quake and even several members of the Inhuman Royal Family.

For a time, Hive seemed unstoppable. But the combined might of S.H.I.E.L.D. and the Inhuman Royal Family eventually proved to be too much. During Hive’s final play to turn all humans into Inhumans, he was trapped in a small Quinjet by the disgraced Kree soldier Noh-Varr, sacrificing himself in order to make amends for all the Kree had done to the Inhumans. Accepting his fate, Alveus and Noh-Varr drifted off out of Earth’s atmosphere, having a genuine conversation about the paradoxes of humanity, before the Quinjet exploded, killing them both.

Retrieved from "https://marvelcomicsfanon.fandom.com/wiki/Alveus_(Earth-101)?oldid=250310"
Community content is available under CC-BY-SA unless otherwise noted.