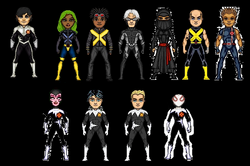 As the student body at the Xavier Institute grew dramatically, headmasters Cyclops and Emma Frost opted to organize the students into training squads, in addition to their studies, to ensure a more well-rounded and individualized education. Northstar, though a recent addition to the Xavier Institute, was given permission to have a squad, which he readily accepted. The students he chose were Eric Gitter, the tattooed titan Ink, Maxwell Jordan, the spunky and spiny Quill, and Dallas Gibson, the silent shadow Specter, and he was assigned charge over Thomas Shepherd, the silver streak Speed, his brother Mark, the musical marvel DJ, and Clarice Ferguson, the whimsical warping Blink. He dubbed his squad the Alphas, after his former teammates in Alpha Flight.

During an as-of-yet-undetermined problem at the Institute, Northstar was consulted for help and secrecy by Speed, Ozone, Pinpoint, Contact, Basilisk, and Prodigy, and Northstar promised his secrecy, dubbing them honorary Alphas. This was a reference to the television show of the same name, which featured a cast similar to those students.