See also Alpha Flight for a complete list of references to distinguish between these closely named or closely related articles. 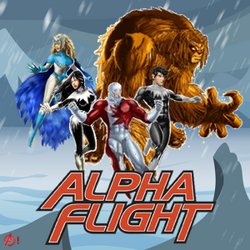 Alpha Flight's origin is the same as that of their Earth-616's counterpart.

The team found a winged mutant crossing the American-Canadian border at 112 kph. and decided to intercept him, leading into a fight between the two sides. Guardian dismissed him, but Northstar insisted to take him to their headquarters, since Icarus had mentioned the Hellfire Club. Eventually Josh opened up to them, especially Jean-Paul, and soon the Blackbird came to pick Icarus up.[1]

Retrieved from "https://marvelcomicsfanon.fandom.com/wiki/Alpha_Flight_(Earth-1010)?oldid=220827"
Community content is available under CC-BY-SA unless otherwise noted.