Start a Wiki
"Along Came A Venom" is the nineteenth episode of Assemble!'s Season Three and the sixty-fourth episode overall.

-He was always a jerk to us. - Sam Alexander shrugged.

-SAM! - Danny Rand exclaimed. -No one deserves that. Not even Flash. -

-For the first time ever, I'm gonna agree with Captain Bucket-Head. - Peter Parker commented. -He deserved it. -

-Also, I think it's pretty clear that can happen to ya if you join the military. - Luke Cage commented.

Sally Avril was crying her eyes out on Kong's shoulder.

-Guys, I would stay a little longer but I got an important matter to discuss with Mr. Fantastic and Fury. - Peter said, waving bye to his friends and walking into an alley, just before Spider-Man jumped out of it. Once Peter had arrived at the Baxter Building, he found Major Glenn Talbot and Colonel James Rhodes along with Fury and Richards.

-What are they doing here? -

-The reports we got from FitzSimmons say that the Symbiote sample we got is already able to be dominated by a host, with a 80% chance it will respond to the orders the human brain gives. - Dr. Richards started talking. -It is also said a third of Symbiote can locate the other two, just like Gargan did when he broke into the lab. -

-What does that have to do with me? - Spider-Man asked.

-Parker... - Fury stood up. -We brought two members of the U.S. Military, Colonel James Rhodes and Major Glenn Talbot here... Because we have a plan on how to locate the other parts of the Symbiote and stop Venom from getting them first. -

-Parker, it's the best thing to do in this situation. Simmons is one of our best biochemists, I would trust her without a doubt. -

-She still said 80 percent! There's a 20 percent you're not taking into account! -

-The other 20% can be controlled with a lot of mental discipline. - Talbot spoke.

-I can't believe you two are on the same side! You never agree on anything! -

-That's what I said. - Rhodey shrugged.

-Colonel Rhodes, please tell me you don't agree with them. -

-HOW?! Human lives are essential! -

-We would be saving millions of lives! - Fury raised his voice.

-WHAT IF IT GOES WRONG?! - Peter took a step forward. -WHAT IF THE SYMBIOTE TAKES OVER THIS PERSON AND WE CREATE ANOTHER VENOM? OR ANOTHER TORMENT? -

-That's why they are here. - Ex-Director Fury looked at the two men from the military. -The host will be from the Military. -

-Is this about being stronger? That is greed! -

-Not only about the enhanced strength and agility... - Rhodes shook his head. -The ability to walk again. -

-It's time for you to know who will be the new host... He has agreed already... - Mr. Fantastic stood up. -Come with me. - He led him to the Baxter Building lab. -I'll leave you two alone - he said, as he opened the door. Peter couldn't believe his eyes.

-Flash? - He asked, looking at the guy who used to bully him. He was now on a wheelchair, without his legs.

-Parker... - Flash pursed his lips, as he looked up at his former enemy. -I don't know where to start. I think... I think I'll start by saying I can't believe I made fun of Spider-Man all this time. -

Flash smiled slightly. -I think I owe you an apology... Being away, losing my legs... It made me realize that I had been a jerk. To you and your friends... Which are superheroes too. I'm so embarrassed. -

-I never saw you like this Flash... - Peter whispered.

-Neither did I. I used to have it all, you know? - Flash looked down. -Girls, popularity, strength, looks... And now I got nothing. Well... I have one last chance. -

-What do I have to lose? - Flash finished Peter's sentence.

-If this Symbiote takes over... Please kill it. - Flash looked into Peter's eyes.

-It won't be me anymore. I feel this is just a last chance to redeem myself. But if I can't control it... I will know there's no redemption for me. -

Flash ignored Parker's comment. -I will need a superhero name. -

-I was thinking of Agent Venom. -

-Peter... - Mr. Fantastic, Jemma Simmons and Dr. Pym walked inside the room. -We would need you to get out of the room. We will start the bonding now. -

About an hour later, the eggheads walked out of the room.

-Peter... - Reed walked to the teenager. -You should go to the roof. And make sure to put your suit on. -

Once Peter arrived to the roof, he saw a figure wearing black, with a white spider across the chest. 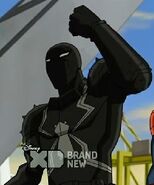 "It's Agent Venom"
Add a photo to this gallery

Retrieved from "https://marvelcomicsfanon.fandom.com/wiki/Along_Came_a_Venom_(A!)?oldid=92803"
Community content is available under CC-BY-SA unless otherwise noted.