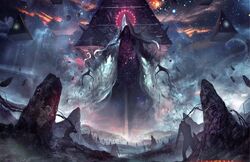 Reign of Darkness and Damnation

Approximately twelve billion years ago (at least a billion years since the Big Bang, the creation of the prime universe), the non-Celestial cosmic entity and primordial archdemon that resides in a pocket nether dimension named Chthon, secretly and tactically wages a great war with his army of darkness and the intentionally formed league of pure evil called the Allied Empire of Damnation (consisting of the Hell Lord Mephisto, his ungrateful son Blackheart, the then-current holder of the Satan epithet that was Marduk Kurios, the fallen angel Zadkiel, the mysterious demonic goddess Asteroth, the Cthulhu Mythos, the future Japanese God of Evil Chaos King, the future Spirit of Vengeance Zarathos, and a momentarily-possessed Phoenix Force) against the Conservators of the Cosmos, a democratic council of benevolent, god-like beings who had served as the first guardians and peacekeepers of the young universe, in accordance to the legacy left by a noble sector of Celestials, years before their unexplained demises.

Amidst the worsening chaos between both sides, the war would on for the next billion years, which covered most of reality in great darkness due to the slow but progressive forces of Chthon in his conquest to most of the young universe in anti-matter using the empire's primordial anti-matter generator (something they acquired from the alternate realm that was the Negative Zone), with the great war seeming like it would last for an eternity, and the worse case scenario of the empire of evil gaining victor and overall control over the universe once they have gotten to slaughter all of beings who deemed to get in their way and prevent their insurgency. Unbeknownst to everyone else but the four leaders themselves, most of their most powerful weapons and source of energy were obtained through the access of several, which included the likes of the Lord of the Dark Dimension Dormammu, and the mysterious powerful godess by the ancient epithet of the Eternal Empress.

Ascendancy of Light and Legitimacy

Almost two billion years have passed during the reign of terror inflicted by the Allied Empire of Damnation across the primordial stages of the universe, the conflict was finally won and order was restored by the surging forces of good and ideological supporters of peace (which included Those Who Sit Above in Shadow, the cosmic runner and traveler Gilperperdon, and the angelic precursors to the Spirits of Vengeance), which were different but mutually-allied resistance groups that had fragmented from the Conservators of the Cosmos since it supposedly fell during the war of darkness that lasted for almost more than two billion years.

In the very final moments of the Allied Empire of Damnation at the hands of the collective good and noble forces of reality, most of its members, along with their most powerful and dangerous technology & equipment (such as the Anti-Matter Generator and Universal Energy Reactor), were completely destroyed and obliterated from existence and died out, while some others barely survived the ordeal by escaping through other dimensions and realms beyond the observable universe, which was now persistently guarded by the successors of peace since they have truly achieved decisive victory against the imperial forces of the damned, and were now on their minds to make a new, far better start in the scorched and devastated cosmos that was still so young, and yet it has already went through so much, considering that it is only at least two to three billion years old at the time.

Risen From the Ashes

The complex destruction of some heavenly bodies (from planets to galaxies) battled on during both eternal conflicts has only led to to the subsequent creation and formation of more and more nebulae, galaxies, star systems, and even new forms of life across the vast cosmos that has yet to be filled with anything benevolent, which two of those wonderful creations being most of the galaxies of the Virgo Supercluster (possibly even the Milky Way Galaxy just as well), and the cosmic nimbus Yggdrasil, the iconic World Tree (along with almost everything around it) and the Quantum Realm, the bridge between the earthly plane to the energy-based realms that were the Quantum Zone and the Microverse, a magnificent breakthrough that would later be discovered by the Terran Scientist Supreme, Dr. Hank Pym along with Janet van Dyne, on Earth. Later on during the modern era, this mostly forgotten event would later be eventually termed by modern day humans' historical, philosophical, and scientific teachings as the "Dark Ages" as a significant part of the Big Bang's consequential aftermath.

Billions of years later, during the early to mid-1920s, the historical Terran human writer by the iconic name of H.P. Lovecraft would write about the great old ones, one of the legendary deities of pure evil who participated during the Dark Ages in side of the Imperial Forces of the Damned, after somehow discovering several mysterious sacred texts he had found on an unknown location regarding the wrathful godly entities, to which it became a remembered legacy to Earth's literature throughout most of its history, and eventually a contributing key into simply answering one of the greatest questions of mankind: "Is anyone or anything else out there?"

In the final moments of the Allied Empire of Damnation before it was completely dismantled, Chthon was forced to flee from the observable universe, the main battlegrounds of the billion years war. Before doing so, he put into writing all his evil and dogmatic ideologies, works, and mystical spells on an indestructible parchment in which he also sealed with a superb substance formed from an unknown energy source. The sacred texts were later bound together into a tome as the "Darkhold." Before his ultimate form was apparently killed by the fighters of peace, he summoned fragments of his duplicated selves (Broodlings of Chthon) in a group of primordial humanoids who were previously known as random inhabitants of an unknown lost and barren planet, a planet that would eventually be referred to as Chthon's personal Hell, also known as the Other-Realm.

In his dying breath, Chthon had ordered his last surviving broodlings to take the texts and remain hidden within the planet through repopulating their kind and await for the time of his next awakening. At some point billions of years later during the modern era, the Darkhold would somehow make its way into Earth, were it would eventually be unintentionally opened by the third Ghost Rider, thus commencing his reawakening in the later days of apocalyptic and penultimate timeline that was the Ends of the Earth.

Retrieved from "https://marvelcomicsfanon.fandom.com/wiki/Allied_Empire_of_Damnation_(Earth-61615)?oldid=237880"
Community content is available under CC-BY-SA unless otherwise noted.