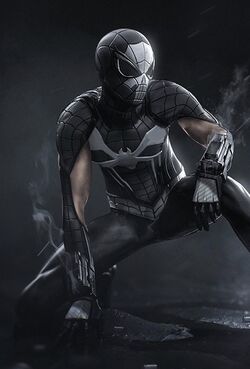 See, most people like to squish spiders, but not me. I like peel the legs off one by one and watch them squirm.

Alistair Smythe has always had a gifted intelligence. His father, Spencer, fostered his gift from a young age and always helped him with his innovative inventions. One day, there was an explosion in Spencer's lab which claimed his life and paralyzed Alistair from the waste down.

Alistair grew bitter and was eventually recruited by the Kingpin to be his personal scientist. Over time, Alistair came to respect the Kingpin and share his disdain for the vigilante Spider-Man.

When he discovered Kingpin's ties to the organization Hydra, Alistair was able to gain access to their extensive technology. He went on to build a suit of armor for himself based off of Spider-Man so that he could walk and mimic his powers. Since perfecting his armor, he has since become one of Hydra's primary enforcers and often finds himself locked in battle with Spider-Man, who he is intent on bringing down.

Retrieved from "https://marvelcomicsfanon.fandom.com/wiki/Alistair_Smythe_(Earth-101)?oldid=248190"
Community content is available under CC-BY-SA unless otherwise noted.