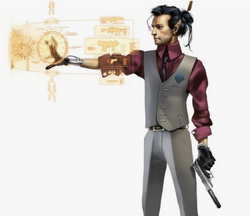 Look at all I've achieved. Could a madman have done any of this?

Forge was a dedicated member of Apocalypse's Armada, and one of his top weaponry designers. However, after the rise of Ultron, Forge betrayed his master and approached Ultron, offering up his talents.

At first, Ultron considered just killing the mutant, but was fascinated by his ability to communicate with technology, and instead formed a partnership with him. Forge now designs Ultron's weaponry, and provides his upgrades.

When the Outsiders came to Earth-9999, Forge came into conflict with an alternate version of himself. When they engaged in technopathic battle against each other, the Outsider managed to prevail and override this version's consciousness, absorbing all of his information and rendering him braindead.

Retrieved from "https://marvelcomicsfanon.fandom.com/wiki/Alistair_Silvercloud_(Earth-9999)?oldid=246136"
Community content is available under CC-BY-SA unless otherwise noted.