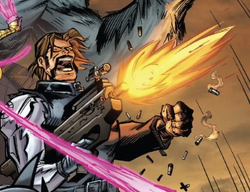 Earth-511
Base Of Operations
The Outside
Characteristics
Gender

All I've ever done is make life worse for the people who cared about me. For the longest time, I thought I deserved to rot in Hell. I probably still do. But I'm done living in this hole I've dug for myself... I want to feel like I'm doing something good again.

Alistair Silvercloud grew up as a pariah in his tribe, always trying to usher them forward into the future with his technological advancements. His sense of displacement eventually led him to join the X-Men, a team of mutant superheroes, where he met and fell in love with a former assassin named Domino. After serving on the X-Men for years, Forge became sympathetic to the mutants with detrimental mutations and begins working on a mutant cure. Believing he had make a breakthrough, he tested his cure on his teammate, Rogue. At first, the cure seemed successful, and Forge began administering it to other mutants, but it soon became clear that the loss of powers was just the first symptom of what came to be known as the Legacy Virus. Soon, even mutants who hadn't taken the cure became infected, and all across the globe mutants began going extinct, with only Forge to blame. Distraught and heartbroken after Domino succumbed to the Virus, Forge became a recluse and locked himself away from the X-Men who were still fighting for survival.

Forge was recruited onto the Renegades under the promise that if he were to return to his world, the mutant race would go completely extinct, and the Virus would extend to humanity, eventually leaving Forge the only living being on Earth. Partially believing he deserved such a sentence, Forge only accepted because he felt he had no other choice. He ended up going on several bloody missions with the Renegades before being pitted against the Outsiders to consolidate the teams.

Forge survived the battle and was placed on the Outsiders. He initially had poor relations with his new teammates, but eventually remained the only Renegade left, following Ravager returning to his home reality and Deadpool being abandoned on a zombie-ridden world. Forge would soon come to open up to his teammates, particularly the alternate version of his wife, Black Widow, about his mistakes and his desire to make amends. The Outsiders were quick to accept him and offer him a new family, which he slowly came to accept.

Retrieved from "https://marvelcomicsfanon.fandom.com/wiki/Alistair_Silvercloud_(Earth-511)?oldid=245794"
Community content is available under CC-BY-SA unless otherwise noted.