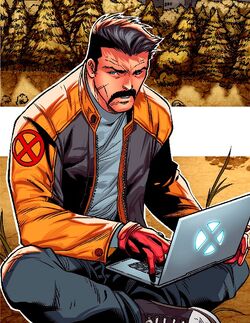 You people act like it's impossible to meld ancient tradition with modern technology.

Alistair Silvercloud grew up surrounded by family on his tribe's reservation in Kansas. He always held great respect for his family and their traditions, but was always invested in harvesting his intellect by coming to understand the advances in technology happening in the modern world.

When he reached adulthood, he made the decision to leave the reservation and make a life for himself. It was around that time when he discovered that the reason he had always been so good at working with technology was because he could communicate with it. It wasn't long until he met Charles Xavier, who offered Alistair the opportunity to hone his abilities firsthand. He accepted and helped Xavier build Cerebro. However, rather than agreeing to join X-Force, Alistair opted to continue on his own way.

Over the years, he would end up discovering his mutation allowed for damaged body parts to be replaced by machinery, making the communication between himself and the technological mainframe easier. When mutant and human tensions began rising, and the Sentinel Program was put into effect, he decided it was time to get involved in something bigger than himself, and offered his services to assist the X-Force, being welcomed into their home on Krakoa.