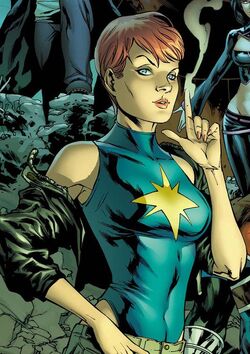 Everyone makes sacrifices. Most musicians aren't this lucky. Time to stand up for my brothers wholeheartedly again.

Dazzler's history is exactly the same as that of Earth-616's Alison Blaire up until the Marvel NEW! relaunch.

Dazzler witnessed a mutant mugging while returning home from one of her tours. She was struck by the horror of mutant persecution. This inspired her to quit her music career and rejoin the X-Men. She was now highly persecuted by her fans, and had to devote her life to the team.

Dazzler is a great singer, a highly-skilled athlete, and skilled combatant.

Retrieved from "https://marvelcomicsfanon.fandom.com/wiki/Alison_Blaire_(Marvel_NEW!)?oldid=232667"
Community content is available under CC-BY-SA unless otherwise noted.