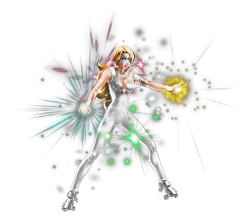 Listen. Can you hear it? The wind. Cars. The ocean. The laughter and the screaming and the hum of everything. This city is a symphony. And I'm her speaker.

Dazzler's origin is the same as that of her Earth-616's counterpart.

Sound Conversion: She has the ability to transduce sonic vibrations, which reach her body into various types of light. This ability seems to operate over a great range of frequencies, including the audible spectrum (35 to 16,500 cycles per second), and a great variation of sound pressure levels regardless of the complexity, dissonance, or randomness of the sound. For example, a car crash and a symphonic passage of equal duration will both produce usable music incoming acoustic vibrations. Dazzler, however, does prefer the sound of music, particularly that which is rhythmically sustained. Not only is music more pleasant to her ears, but the steady beat of popular music provides a more constant source of sound to convert. However, she cannot use any sound produced by her own body. Despite the limits of her sound conversion ability being unknown, she was capable of absorbing unimaginable sounds, including the explosion of an entire galaxy, to boost her to sufficient levels when exposed by Galactus to travel into a black hole on its behalf.

Light Projection: Dazzler possesses a body-wide energy field that controls the energy levels of the outer electron shells of her body in such a way as to cause the cascaded release of photons. In effect, this field is lasing, with the apparent efficiency of a laser (99.9%). The released energy is far greater than the incoming kinetic energy and therefore must involve an outside energy source, the nature of which is unknown. Left undirected, the Dazzler’s light will radiate from her body in all directions, producing regular flashes of white light (white light is a mixture of all portions of the visible spectrum). By conscious control over the light she produces, she can control its direction, frequency (color), amplitude (intensity), and duration. Apparently the Dazzler must consciously or subconsciously will the light to leave her body. Otherwise, light would “leak” from her at all times, even when she is asleep or unconscious. She can produce numerous effects with the light she converts from sonic vibrations. She can create very simple patterns out of rays of light like circles, squares, triangles, and stars. She can create a pulse of light on the order of several thousand watts seconds of power, which temporarily blinds people with its brilliance. She has learned to manifest her light as:

Light Immunity: Her body, especially her eyes, shields itself against any injurious effects of her light transducing abilities, and against those of bright lights in general

Sound Immunity: She has the ability to transduce sound also protects her from being deafened by loud noises.

Dazzler is a highly skilled athlete, and has become a good hand-to-hand combatant thanks to her training with the X-Men.

The Dazzler possesses the normal human strength of a woman of her age, height, and build who engages in intensive regular exercise. Dazzler once stated that being mutant gave her an enhanced strength.

She cannot use sounds produced by her own body as a source for her power.

Retrieved from "https://marvelcomicsfanon.fandom.com/wiki/Alison_Blaire_(Earth-1010)?oldid=220822"
Community content is available under CC-BY-SA unless otherwise noted.