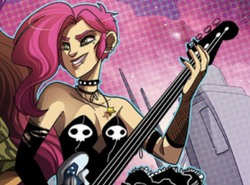 How are you doin' tonight Krakoa?! I've got just one question for you! Are you ready to rock?!

After becoming estranged from her parents, Alison Blaire ran away from home and moved to San Francisco. She decided to follow her passion of making music, only to discover that her mutant ability allowed her to transform sound waves into solid light, as well as several other uses.

She earned a reputation as a street performer, which attracted the attention of three female mutants who were part of a band, but needed a bass player and a back up singer. Alison happily accepted their offer, and they began touring across the United States in mutant friendly cities. However, one of their concerts was interrupted by a Sentinel attack, which killed the other members of the band, leaving only Alison, who barely managed to escape.

While on the run, she was located by Charles Xavier, who sent the Angel in to extract her. She became enamored with him at first sight, and ecstatically accepted the offer to become a Krakoan resident. It wasn't long until she and Angel began dating on and off. She was always worried for his safety during X-Force missions, which she was hesitant to go on. She preferred to use her powers constructively, but eventually came to realize that sometimes she needed to use them in more dire situations for the greater good.

[[Category: In a Relationship with Warren Worthington III Characters]]