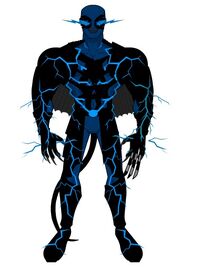 Alickz was on a trip to the Science center where they were showing off a spider and all kinds of inventions but the spider was so strong it broke out and bit the nearest thing next to him which was Alickz. The Spider gave him powers the same powers as the original spider-man after that day his life would never be the same He started going through different changes he tried to use this power to make money but realized who cares then he saw a robber and got an idea to fight crime about a few months after he mastered his own abilities a symbiote came down to earth and attached to Alickz but he controlled the symbiote and took away the symbiote's personality in order to control its power so currently the symbiote has permanently bonded to him and now has all the power of him and the symbiote together so now when he activates the Navy symbiote and changes into his costume fighting crime and he gets all new powers together with his old and then he mastered the static cling he uses for wall crawling but the thing is the only reason he could wall crawl is because his body is actually holding bio-electricity inside of him which he uses to use he can manipulate it in any way he wants he has mastered this ability. He mastered his spider-sense also allowing him to know the actual danger that will be coming and uses it to see through smoke and can use it to see the near future to see which move his enemy would do next. He is the Sworn protector of New York City and Nueva York. 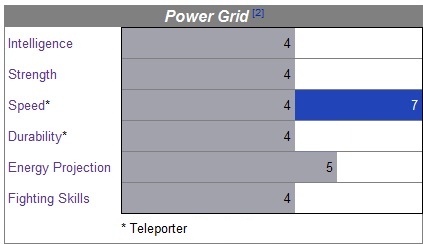 Since his body is always making electricity when hes sleeping and uses it he can risk energy depletion but can recharge. He cannot use some powers at the same time but he can use a lot of his powers. He can use his powers on water by electrocuting it but however when he is charging for an electrical attack by gaining the electricity from his body and transferring it to his hands where he can shoot it out he is vulnerable to a large body of water where he can short out and lose all the electricity in his body.

Equipment: Spider-Man's costume is made of super Kevlar, blue part, which is strong enough to deflect bullets and not burn it is very flexible material but also very durable. The black places are the symbiote part of the costume making a spider in the middle then stretching all across to boots and gloves there is a big Black X in the back and on the black line that looks like his belt is an endless hole which he can use for storage and the middle button inside of it is used to a light air foil on his back and underarms like a flying squirrel This foil emits a low concentration of anti-gravity particles that allow Spider-Man to glide on currents of air. He needs this because some places in the city the buildings are to far apart to jump but he could throw a web line to them but he mostly needs it from jumping off of of high things for freefalling. At the Top his costume is Reflective See-through material that magnifies his glowing blue eyes across his whole face. The whole suit has unstable molecules that are designed to resist tearing of his claws but also thin enough to use his wallcrawling. He can store the unstable molecules underneath his skin and call upon them at will to change into his costume. What the costume would look like if nobody was wearing it is just a big blue Jumpsuit with just big Mirror Eyes and a button on the lower part of the body.He also lives in an apartment in N.Y.C. but he modified it with the push of a button it turns into a spider web headquarters which he humbly names this hq, The Web.
Transportation: Web Slinging, Running/Jumping across rooftops. Spider-Cycle
Weapons: He throws Shuriken, Makes Spikes with Symbiote, Talons, Claws, Fangs, and Electrical Attacks

Retrieved from "https://marvelcomicsfanon.fandom.com/wiki/Alickz_Rider_(Earth-616)?oldid=259044"
Community content is available under CC-BY-SA unless otherwise noted.