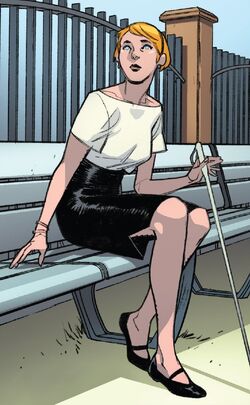 The One Who Sees With Her Heart
Identity

My god... Benjamin Grimm, you're beautiful.

Alicia Masters was born blind, which she always used as an excuse to form a deeper connection with life. Her father, however, saw it as a disability and her as a disappointment. They inevitably grew apart, and Alicia decided to become a sculptor, perhaps the only thing she and her father had in common.

She eventually crossed paths with Ben Grimm mere weeks after the Fantastic Four received their powers. While Ben felt like a monster and a pariah, Alicia saw through his rocky exterior and into his heart. The two quickly fell in love, but things became complicated when her father reemerged, having discovered cosmically radiated clay, which he used to commit crimes using others as his puppets.

[[Category: In a Relationship with Ben Grimm Characters]]
Retrieved from "https://marvelcomicsfanon.fandom.com/wiki/Alicia_Masters_(Earth-101)?oldid=249997"
Community content is available under CC-BY-SA unless otherwise noted.