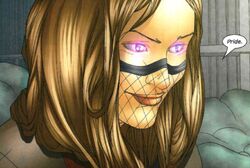 Mutant, The Outcasts (with her spouse)
Identity

Well, we all know what goeth before the fall, don't we?

Alice Hayes' origin is the same as that of her Earth-616's counterpart.

Alice possessed mutant powers identical to those of her husband due to the genetic engineering of Dr. Hayes. These powers included:

Retrieved from "https://marvelcomicsfanon.fandom.com/wiki/Alice_Hayes_(Earth-1010)?oldid=259319"
Community content is available under CC-BY-SA unless otherwise noted.