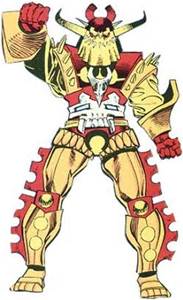 Dark Elves of Svartalfheim; formerly ally of the Masters of Evil
Universe

Little is known about Kurse's life before the Masters of Evil's attack on Asgard. It can be assumed to be similar to his mainstream counterpart.

Ulik and Kurse impeded the progress of the heroes through Niffelheim. Once the villains are defeated, the heroes were able to find Volla's ring and proceed with their quest.

Kurse is a formidable hand to hand combatant, relying primarily on brawling techniques that allowed him to make full use of his vast strength.

Like all Dark Elves, Kurse is vulnerable to iron. A blow from iron can harm him whereas an equally strong blow from a different substance would not harm him at all.

Retrieved from "https://marvelcomicsfanon.fandom.com/wiki/Algrim_(Earth-6109.2)?oldid=201580"
Community content is available under CC-BY-SA unless otherwise noted.