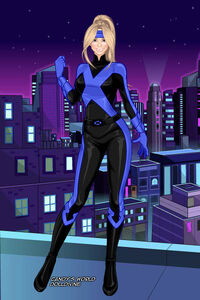 Alexandria Summers is Scott and Emma's daughter and the twin Sister of Ashley.

Alexandria Frost-Summers is among the tomboys in the Underground X-Men team and the twin sister of Ashley. Daughter of Cyclops and Emma Frost-Summers she has older half-siblings from her father’s previous marriage Cable, Marvel Girl, Marvel Girl II, Phoenix. Alexandria likes the keep up the pace and do her combat battling skills. Her best friend is Molly Henriquez.

Retrieved from "https://marvelcomicsfanon.fandom.com/wiki/Alexandria_Summers_(Earth-16160)?oldid=235454"
Community content is available under CC-BY-SA unless otherwise noted.