Marvel Fanon
Register
Don't have an account?
Sign In
Advertisement
in: Characters, Templated Articles, No Dual Identity,
and 23 more 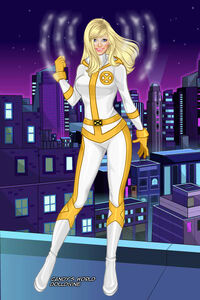 "I'm Alexandra Frost, I may look identical to my sisters but what sets me apart from them is that I'm a young genius and a feminist."

Alexandra Frost is the brains of the Frost sisters. She has the same powers as her sisters, in addition to an amazing IQ which puts her at top level at the institute. Alexandra has often acted as a mediator when her sisters get into an argument.

Her best friend is Pixie, who is dating her science partner Kid Omega. While on a mission, Alexandra suspected a scientist was planning to exterminate mutants, and she used her hive mind powers to contact her sisters and her telepathy to contact Professor X.

In addition to her duties with the Young X-Men, Alexandra designed a blueprint to build new gauntlets for teammate Surge and recruited Polaris and Mach II to help with the process. Cyclops, the Professor and Beast were so impressed with Alexandra’s newest gauntlet blueprint design that she was given a Special Commendation for her achievement, while Polaris and Mach II also received special honors.

Wise, patient and intellectual beyond her peers Alex Frost has set the bar for future initiatives for the new young generation of Mutants

Alexandra's powers are identical to those of her sisters.