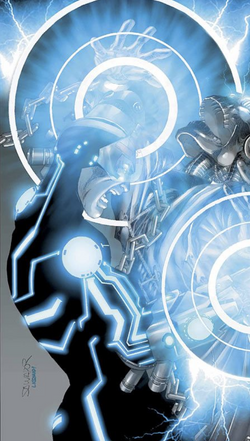 You know, I'm actually a pretty nice guy once you get to know me. I mean, if you can look past the hundreds of people I've killed. But most of them were humans, so they don't really count.

Alex and his older brother, Scott, lost their parents at a very young age. They were taken in by Apocalypse's top scientist, Mister Sinister. He bred them to be killing machines. Becoming Havok and Cyclops, they both acted as some of the top agents in Apocalypse's Armada.

Havok is fiercely loyal to his adoptive father, and to Apocalypse. He views his powers as a sign of his own godhood, and enjoys using them to kill humans. He is suspicious of his brother, believing he may be working with the X-Men. However, his love and admiration for his brother prevents him from investigating further. He does not want to shatter his own beliefs.