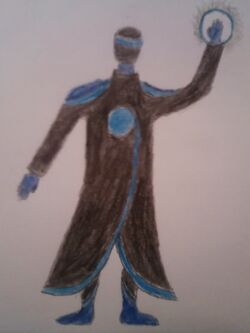 Alexander Summers is the brother of Cyclops. He grew up caring little for his brother. He felt little pity when he pushed Scott off his snowboard on a vacation and a rock got lodged in his brain. He soon went off to become an expert surfer. He made great money, and he was very famous. But he always felt unfulfilled, especially since Scott was always pitied.

Alex continued his surfing career, as it brought him fame and appreciation and fame. Soon he received a postcard from his brother, stating that he discovered that he was a mutant, and that he could fire energy from his eyes. He also told Alex that he had become an X-Man. Worrying that he, too, might be a mutant, he discovered that he had powers similar to those of Scott. Hiding this from the media, he soon quit his surfing career to the surprise of his fans. He then moved to Arizona, and became an accomplished geophysicist, seemingly finding a purpose at last.

But the mutant world still could not elude him. The Scarlet Witch soon came to him with news of his brother's death by his own hands. Alex made it seem like he was upset about his brother's death, but he was secretly happy at last. Scarlet Witch was not clear enough on her purpose, though, and she later returned to him, stating that she wanted him as a member of her anti-mutant Brotherhood, and Alex was reluctant, but Scarlet Witch altered reality to make his personality more radical. This new personality agreed, and joined the Brotherhood as their last recruited member, at first without a codename, though he later chose the codename Havok.

Energy Absorption: Havok's body is always absorbing cosmic and solar energy and converting it into plasma. He can absorb any other energy as well.

Plasma Blasts: Havok can release plasma blasts from his body. These waves go in all directions unless he tries to channel it, usually on his arms. Objects hit by his plasma waves sometimes shatter, explode, or disintegrate.

Flight: Havok can fly by aiming his plasma blasts at the ground.

Energy Detection: Havok has the ability to detect energy anywhere, including others with energy powers and object-created energy.

Energy Reflection (latent): Havok will one day access the ability to reflect any energy he absorbs.

Combatant: Havok was self-taught in martial arts, and excels in the craft.

Genius: Havok was a former geologist, and was classified a genius.

Retrieved from "https://marvelcomicsfanon.fandom.com/wiki/Alexander_Summers_(Earth-5)?oldid=244888"
Community content is available under CC-BY-SA unless otherwise noted.