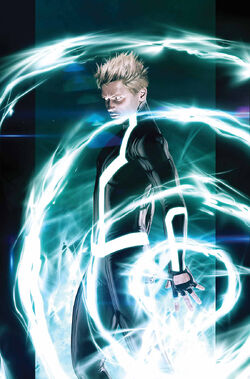 Time to wreak some havoc!

Alex Summers was separated from his older brother, Scott, at a young age after their parents died in a plane crash. While Scott was adopted by a nice family in Florida, Alex went into the foster system and never truly found a home. This made him bitter and angry, which was only made worse when his mutant powers manifested, turning him into a target from the police. After spending weeks on the run, he was recruited by Magneto to join the Brotherhood of Mutants and fight for his rights by any means necessary. He adopted the name Havok and fell in love with Magneto's daughter, Scarlet Witch. After Magneto's untimely death at the hands of Emma Frost, Havok took up leadership of the Brotherhood. Although they would often come to blows with the X-Men, Alex's growing relationship with his brother, who he'd been reunited with on the battlefield, leads to the two teams coming to an understanding.

Not very long after the X-Men and the Brotherhood formed a shaky alliance, Havok was recruited by The Outsider to help Mystique gain the trust of her teammates. His arrogant and abrasive attitude was a quick reminder that anything is possible in the multiverse, but after spending some time with the team, Havok found himself softening and was even grateful to get to know Cable, his nephew from another world.

Havok served with the Outsiders for a time, until the Outsider informed them that Spyke had completed his mission. He took that opportunity to return Havok to his home world as well, believing he had served his purpose. Havok was hesitant to leave his newfound team, but was also happy to return to his home world. He would later be devastated when Mystique's body was returned home by Cable.

[[Category: In a Relationship with Wanda Maximoff Characters]]