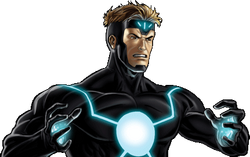 Havok's origin is the same as that of his Earth-616's counterpart.

Havok joined the X-Men in several fights against the Brotherhood of Evil Mutants,[1][2] Psylocke,[3] Emma Frost,[4], Ultron[5], Apocalypse and his Horsemen[6][7] and the Phoenix Force[8][9]. Havok also helped Moon Knight against Living Pharaoh and Plasma.[10]

Alex is an Alpha-Level Mutant granted the following abilities:

Ambient Energy Conversion: Havok absorbs ambient cosmic energy into the cells of his body and processes it into plasma. This results in control over an extremely powerful sort of destructive force. At times he is not entirely able to control this ability, which sometimes makes him a danger to those around him unless he wears a special containment suit to assist him. Havok's body is constantly in the process of absorbing cosmic radiation. When each of his body's power-storage cell enclaves reaches its capacity, excess cosmic energy is thereafter absorbed and immediately re-emitted in negligible quantities. Upon the total expenditure of all his available energy, it takes Havok's body about 16 ½ hours to recharge to its peak level unless he absorbs a large amount of energy at once. The act of concentration involved in releasing his energy in anything other than an omni-directional wave is physically exhausting for Havok if he continues it over an extended period of time. He can absorb cosmic energies from his environment (such as starlight, x-rays, and gamma radiation) and store them within his body cells, metabolizing the energy in order to generate plasma wave discharges that super-heat and disintegrate objects or create concussion bursts by violently displacing air molecules in his path.

Heat Immunity: Havok is virtually immune to the effects of most forms of heat.

Radiation Immunity: Havok is virtually immune to the effects of most forms of radiation.

Intellectually gifted, Havok is well-educated in the geophysical sciences and has been trained in martial arts by Wolverine.

Havok possesses the normal human strength of a man his age, height and build who engages in intensive regular exercise.

Uncontrolled Ambient Energy Conversion: At times, he is not entirely able to control this ability, which sometimes makes him a danger to those around him unless he wears a special containment suit to assist him. This may also be due to psychological trauma similar to his brother.

Genetic Flaw: Havok is not immune to Vulcan's powers, but is partially resistant to it by way of his ability to absorb energy. Havok is immune to Cyclops' optic blasts as Cyclops is immune to his powers.

Equipment: Most of Havok's costumes act as a containment suit and constantly monitor his energy output.
Transportation: X-Men Blackbird
Weapons: Alex once used a small gun that can harbor his energy.

Retrieved from "https://marvelcomicsfanon.fandom.com/wiki/Alexander_Summers_(Earth-1010)?oldid=256251"
Community content is available under CC-BY-SA unless otherwise noted.