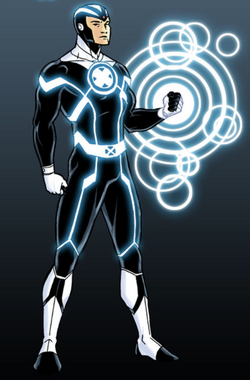 Hey, look at us man! The Summers Brothers back at it again! We should go on tour! You wouldn't happen to play bass would you?

Alex is two years younger than his brother, Scott, and they were raised in a small town in Alaska by their loving parents. When Alex was 8-years-old, their family decided to go on vacation in Europe. However, due to unknown magnetic interference, their plane crashed, killing both of their parents. Scott fell into a coma, and Alex was placed into the foster system.

However, it wasn't long until Alex was adopted by a nice Hawaiian couple called the Masters. He was renamed Alex Masters and spent the next ten years of his life in Hawaii, learning how to surf and trying to forget about the tragedy life threw at him. One day, he was out surfing when a shark bumped his board, knocking him into the water. When the shark advanced on him, Alex was able to defend himself by the manifestation of his mutant abilities, which blasted the shark away.

It wasn't long until Alex was found by the mutant radical Magneto, who explained the truth about what Alex was. He then agreed to join Magneto and venture to Genosha, where he met the Brotherhood of Mutants; Mystique, Emma Frost, Toad, Pyro, Destiny, and Sabretooth. Alex was slightly put off by the intimidating nature of some of the Brotherhood members, but went along with it anyway out of sheer joy of finding his people, and was given the mutant name Havok.

Eventually, the X-Force came to Genosha to rescue Professor Xavier, who Magneto had kidnapped in an attempt to sway him into joining the Brotherhood. During the confrontation, Alex and Scott recognized each other, and became conflicted. However, before either of them could make a decision, the X-Force was able to make their escape.

It wouldn't be long until Havok was able to sneak into Krakoa, where the X-Force had relocated, which recognized him as a threat and held him captive for the X-Force to deal with. However, he was able to convince Scott that he wanted a chance to see things from a different perspective. Professor X allowed Krakoa to release him, and he was taught about Xavier's views of the world, which he came to agree with, and asked to join X-Force. Ever since then, he and Scott have reconnected and become extremely close, and Alex has learned what it means to truly use his powers for good.

Retrieved from "https://marvelcomicsfanon.fandom.com/wiki/Alexander_Summers_(Earth-101)?oldid=249074"
Community content is available under CC-BY-SA unless otherwise noted.