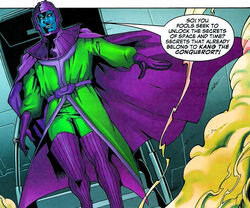 Brown
Skin
BlueUnknown
Unusual Features
Alex's hair was seen when his costume ripped, but aside from that, any features of his body have never been seen.
Status
Citizenship

Single
Origin
Origin
Time-manipulating human who became a great hero in 2099 and sent the Fantastic Four to the present.
Creators

Time. What is it? Does it have a meaning? My dad, he always knew. Technology enables anything, especially the ability in us to be better people. That's why Kang does not conquer time, he enhances it. And K.A.N.G. is what it's all about.

Alexander Stark was born of an affair between his father, Tony Stark, and an unknown woman, believed to be Pepper Potts. The child was raised alone by this woman, out of Tony's world. He longed to be close to his father, however. This was due to the fact that he shared his father's fascination with technology. But when he was killed on a business trip abroad, when Alex was only 7 years old, it sent him into a deep depression.

Though sent to be seen by many specialists, none could help Alex get out of his funk. In this time, he was merely contemplating what could have been if his father was alive. Soon he left his depression... only to enter a stage of obsession. He began studying all known examples of Tony Stark's technology: notably used by superheroes Black Panther, Vision, and Iron Man, and later the Iron Patriot. He began taking notes, and accomplished many tests and many failures with prototype armors.

After establishing a successful armor, he met Vision, the reincarnated version of his father. After a lengthy conversation with him, and a round fighting alongside him, each took pride in the other, and Vision told Alex that extreme power required expert handling. He then stated "Enjoy the timestream," and winked, as Alex disappeared, having accidentally teleported into the future. Realizing the future needed new heroes, he decided to call himself Kang, since "Kings Are Not Gods," which is his father's explanation of the fact that extreme power corrupts.

After establishing himself as the future's premiere armored hero, Kang tried to resurrect his father, but on returning, found the world had taken a turn for the worse. He regrettably left his father to die. Thus he spent most of his time viewing the present day he loved when not out fighting crime. He was also able to view other worlds, notably the main Earth-616. As the heroes came and went, 2099 became well protected by many heroes. But one day, Kang saw an event that startled him: the people in the past who were supposed to become the Fantastic Four died in the crash. Thus he approached the F4 of his era and told them they needed to replace the deceased of the past. Agreeing, they went, and Kang did his greatest act of heroism yet.

Advanced Longevity: Despite the fact that Kang has lived for over 50 years, he's suspended his aging using technology in 2099, making him appear 30 years old.

Super Smart: Kang can comprehend technology far more easily than any other human.

Kang has intuitive understanding of technology, so far expanding to every technology he has ever seen.

Equipment: None known.
Transportation: None known.
Weapons: Kang Armor: Kang wears a battle armor based on the Vision and various Stark armors. It grants him the following abilities:

Retrieved from "https://marvelcomicsfanon.fandom.com/wiki/Alexander_Stark_(Earth-5)?oldid=244882"
Community content is available under CC-BY-SA unless otherwise noted.