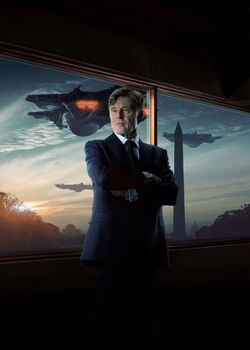 Alexander Pierce's early life is the same as that of his Earth-199999's counterpart.

Alexander Pierce, a government liaison for S.H.I.E.L.D. and member of the World Security Council was in charge of Project Insight, three Helicarriers made to neutralize any threat in a matter of seconds. Nick Fury, however, asked Pierce to postpone launching the Project.[1] The Councilman interrogated Captain America about Fury's supposed death. It was then revealed by Arnim Zola that S.H.I.E.L.D. had been infiltrated by Hydra since Operation Paperclip. Captain America, Black Widow and Falcon interrogated Jasper Sitwell, who revealed that Insight was made to target potential threats against Hydra.[2] Pierce was part of the team that brainwashed Bucky Barnes after his meeting with Steve Rogers in modern days.[3]

When S.H.I.E.L.D. was about to launch Project Insight, Alexander Pierce was joined at the Triskelion by fellow councilmen Rockwell, Singh and Yen, and Councilwoman Hawley (impersonated by Natasha Romanoff). When they were toasting, Captain America infiltrated the building and tapped into the main communicator. The World Security Council members looked at Pierce, betrayed. Alexander, using the name dispositive he had given the Councilmen supposedly granting them access to every clearance level, he fired a laser through the men's chests, except for Councilwoman Hawley. Black Widow knocked out the S.T.R.I.K.E. soldiers and used an EMP Grenade on herself, knocking her down, in the second Nick Fury walked in, holding Pierce at gunpoint. Both S.H.I.E.L.D. agents posted every agency file online, exposing Hydra's infiltration.

As the three Insight Helicarriers started falling and destroying the Triskelion, Fury mentioned how he would have stopped a bullet for Pierce, firing at him twice in the chest. Before he died, Alexander simply muttered: "Hail Hydra".[4]

Retrieved from "https://marvelcomicsfanon.fandom.com/wiki/Alexander_Pierce_(Earth-1010)?oldid=220818"
Community content is available under CC-BY-SA unless otherwise noted.