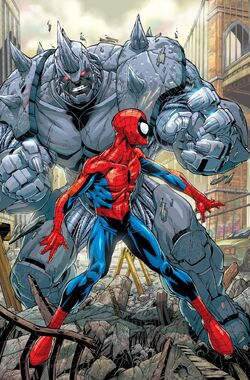 Nobody ever accuses The Rhino of good manners, or else!!!

Aleksei Sytsevich was just another thug in the Russian Mafia, grasping at dreams of easy money, and headed for a short brutal life. Seduced by promises of wealth and power, Aleksei volunteered to be injected with a Soviet Army version of the Super-Soldier Serum throughout several months to transform him into an agent of the Russian Mafia, with superhuman strength for a collective of professional spies. In part, this was to support his mother, his only family left.

After returning home from a failed mission, his house got robbed by the Russian Mafia and there, he saw his mother dying, causing him to mourn in sadness. Then, he avenge his mother's death by killing all the members of the Russian Mafia who were responsible to her death, causing him to slowly turn into a ruthless criminal. He then later stole an experimental suit of armor from an abandoned Soviet Union base and experimented it, then later wears it, becoming the Rhino. He then later legally changed his name to Alexander O'Hirn and moved to America, where he began doing criminal actions as the criminal known as the now self-proclaimed, Rhino.

Using the suit's incredible strength, the Rhino robbed a Manhattan bank, charging the vault head-first and destroying it. He then rampaged through a busy street attempting to make his escape, destroying anything in his path, including police cars, with ease. Spider-Man immediately went into the scene and tried to defeat him but he can't due to his powerful strength. Thankfully, Iron Man arrived, helped Spider-Man stopped the Rhino's assault and captured him. The Rhino was taken into military custody where he was kept under heavy sedation.

After a few weeks, the Rhino broke out of the military hospital and escaped, seeking revenge on Spider-Man, who defeated him once again, this time without Iron Man's help, after figuring out his two major weaknesses. After his second escape at his second capture, Rhino would eventually become one of Spider-Man's known oldest and strongest enemies from time to time, to the point where he even once accepted Norman Osborn and Otto Octavius's invitation to join the Sinister Six (also formerly known as the Sinister Seven), and help them take down the Web-Slinger, on a few, several occasions.

Artificially Enhanced Physiology: Much like the legendary Captain America, a more enhanced and developed version developed by the Soviet Army of the Super-Soldier Serum (S.S.S.) had also metabolized and permanently enhanced all of Aleksei's' bodily functions to beyond the peak of human potential. Over the years, he has repeated the procedure for the purpose of increasing his powers and there has been a dramatic increase in his strength, when compared to his super-soldier treatment.

Retrieved from "https://marvelcomicsfanon.fandom.com/wiki/Alexander_O%27Hirn_(Earth-61615)?oldid=235865"
Community content is available under CC-BY-SA unless otherwise noted.