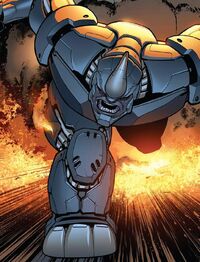 The Hippo (called by Spider-Man)
Identity

Alexander O'Hirn was a military soldier. He was fired during the time when they were experimenting on a giant Rhino-like suit. The suit was incredibly strong, and almost unstoppable. Out of rage, O'Hirn stole the suit, and escaped, killing a lot of other soldiers. The military tried to stop it, but O'Hirn had removed the only way of stopping it (a bomb placed inside).

Being searched for worldwide, O'Hirn decided to live in his secret bunker, just outside New York. Using his gigantic suit, he robbed banks and shops, to steal money, food and lots of other stuff.

O'Hirn first met Spider-Man when he was robbing a bank. They had a massive fight, and Spider-Man thought he had defeated Rhino when he plunged into the sea. However, the Rhino-suit has an underwater feature, so O'Hirn got away, with the suit. Since then, the two have been big enemies of each other.

O'Hirn has had military training. He also has quite a knowledge of weapons.

Retrieved from "https://marvelcomicsfanon.fandom.com/wiki/Alexander_O%27Hirn_(Earth-333)?oldid=136302"
Community content is available under CC-BY-SA unless otherwise noted.