Alexander 'Alex' Morrison was born on October 31 in Florida to Rick, a scientist working for S.H.I.E.L.D., and Mary Morrison, a kindergarten teacher.

Black Symbiotic Costume: Upon bonding with the Venom symbiote which grafted itself to Alexander's nervous system, many of his powers were amplified with the symbiote possessing several unique abilities of its own. Venom typically covers Alexander's body in black biomass similar to a sleek black suit though it later gained the appearance of armor after assimilating several pieces into its biomass. When upset or aggressive, Venom's appearance becomes much bigger with fangs and claws.

The Other: After Alexanders was put in a coma-like status following his separation from Venom, his body was surrounded by a cocoon of webbing where he encountered the extremely powerful spider-totem called "The Other" in a vision. While initially wary, he eventually agreed to become its avatar which not only caused him to 'awaken' but also gave him various spider-related abilities. 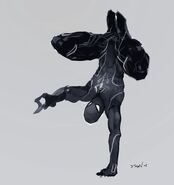 Alexanders second suit
Add a photo to this gallery

Retrieved from "https://marvelcomicsfanon.fandom.com/wiki/Alexander_Morrison_(Earth-2020)?oldid=261807"
Community content is available under CC-BY-SA unless otherwise noted.