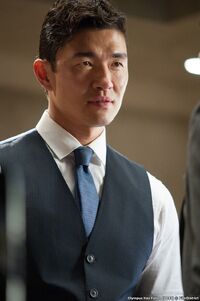 Alex Su is an officer in the Chinese military, who eventually became disillusioned with what he had faced, learned, and been ordered to do in his time as a soldier. He eventually met up with the powerful Chinese businessman Tem Borjijin, who was secretly the underworld figure known as the Mandarin, leader of the terrorist group known as the Ten Rings. He eventually was given a chance to join the Ten Rings after Borjijin learned of his grievances. He told him that it would be his chance to join a group with what he claims are in comparison "legitimate" desires to help the world. Su stayed in the military to act as a spy and informant for the Ten Rings. Su would go on to become Borjijin's closest friend and right-hand-man.

After the acquisition of Stark Industries, Ezekiel Stane got to use its technology in his experiments. He had an interest in improving the human body through technology, which was perpetuated upon learning of Extremis and The Mandarin allowing him to study it. Ezekiel decided to try and take things even further by creating a suit similar to Tony's Iron Man armors, but designed to be a biological part of the human body, which would truly put them on the same physical plane as other more extremely powerful creatures within the universe that Earth had just become aware of like the Asgardians and the Chitauri. Mandarin is impressed with the idea and has him experiment with it on some of his own soldiers including Su. He became a force known as the Crimson Dynamo that was sold as a "government sanctioned Avengers-style protection force" to the world. However, Mandarin envisioned that such a force would help bring order to the chaos that would ensue after Extremis is released, and also protect the world from any powerful alien/cosmic that may try to take advantage of the situation. After seeing the success of his work there, Zeke does the same to his own body.

Able to command fifty of his Crimson Dynamo drones.

Equipment: Exo-suit
Transportation: His suit provides him the ability of flight
Weapons: Built-in guns and other armaments

Retrieved from "https://marvelcomicsfanon.fandom.com/wiki/Alex_Su_(Earth-199999)?oldid=151547"
Community content is available under CC-BY-SA unless otherwise noted.