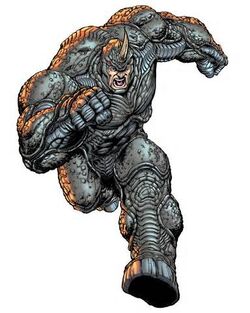 Little is known about Rhino's life before he joined the Masters of Evil. It can be assumed to similar to his mainstream counterpart until the decimation of the mutant race.

Rhino was sent to Murderworld to guard Arcade alongside Shocker. After being defeated the two managed to escape. The duo were later in Asgard guarding Heimdall.

Rhino was on a S.H.I.E.L.D. prison convoy in Maryland some point after joining the Sinister Six. Once the convoy reached Washington D.C., it was attacked by Skrulls posing as Daredevil & She-Hulk. A squad of heroes consisting of his long-time foe Spider-Man, Wolverine, his other nemesis the Hulk, and Deadpool. Naturally, they fought Rhino with the Skrull impostors (Rhino proceeded to impale him with his horn after his defeat), until incapacitating the She-Hulk Skrull which revealed her true form upon unconsciousness. The squad fought "Daredevil" with Rhino, before taking on the awakened "She-Hulk" (with Taskmaster dealing a death blow after stumbling across the fight). Taskmaster convinced Rhino to temporarily side with the heroes in order to take down the other Earth-stationed Skrulls.

On a search for the real Daredevil & She-Hulk: S.H.I.E.L.D. gets a lead from, surprisingly, Vulture. Taskmaster contacts the Sinister Six, and Doctor Octopus is willing to spare Sandman. The squad is also joined by Cable, Kraven the Hunter (hired by Taskmaster), and Penance. Once sneaking inside: Rhino, Captain America, Taskmaster, and Spider-Man finds Skrulls with Vulture, Cable (recently captured), and Daredevil captured; and She-Hulk has been moved from the facility. After freeing the superhumans, a fight ensues across the facility, with the Vulture impostor taken down, but the Cable Skrull escape. However, a Ghost Skrull confronts the team. Upon his defeat, the Ghost Skrull reveals that the Skrulls have infiltrated every superhuman organization by this point.

Though he has had little formal training, the Rhino's sheer strength and resistance to injury render him a formidable hand-to-hand combatant. He uses street fighting techniques that allow him to make full use of those attributes.

Once charging, he cannot change direction or easily halt his advance. The Rhino also possesses below average intelligence.

Retrieved from "https://marvelcomicsfanon.fandom.com/wiki/Aleksei_Sytsevich_(Earth-6109.2)?oldid=158409"
Community content is available under CC-BY-SA unless otherwise noted.