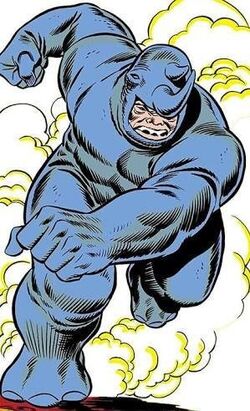 6' 1" (varied due to various levels of gamma enhancements)
Weight

Do I crush his skull under my boot, or impale his heart on my horn? Impale... impale sounds good...

From Russia, to the Ring

Aleksei Sytsevich was born in Russia during the Cold War. Not much is known about his youth, except that he got into fights frequently. Eventually, as a young adult, he was recruited to the Russian mafia, becoming a gopnik (or gang-banger). He frequently got into disagreements with his superiors in the mafia, and this lack of unity in the mafia got him thrown into a gulag. While in prison, his syndicate was wholly dismantled by the Red Room, under the charge of the Black Widow. After serving time with a reduced sentence, he was released, but with nowhere to go, he went to a bar...and promptly got into a brutal bar fight. He was discovered by a promoter, who was impressed by his skills and recruited him to the Russian Wrestling Federation.

Unfortunately, the RWF was not very large, and while impressive in the ring, he was not an Olympic-level athlete, so after demolishing many of his opponents in low-stakes fights, he was let go from the industry. Furious that he was no longer able to do the one thing he had ever been good at, he stowed away to America and began wrestling in New York City, using the alias of the Mammoth in the ring. When he wasn't wrestling, he mostly wandered the streets, which led him to the scene of a Maggia hit. Though he was to be eliminated, he was able to prove his worth as a potential ally, given his brute strength, fighting techniques as the Mammoth, and evident lack of refined intelligence. It was decided that Aleksei would serve as hired muscle for the Maggia, provided he was willing to undergo some...enhancements. Aleksei agreed, and soon, Alex O'Hirn was on his way to California to be enhanced as the ultimate grunt for the Maggia.

To Squash a Spider

The Point of No Return

Gamma Enhanced Physiology: The Rhino's superhuman powers are the result of multiple exposures to gamma radiation. Though initially having only minimal superhuman power, multiple controlled exposures throughout the years have rendered him a powerhouse on par with the likes of the Thing and Colossus.

Retrieved from "https://marvelcomicsfanon.fandom.com/wiki/Aleksei_Sytsevich_(Earth-166)?oldid=258623"
Community content is available under CC-BY-SA unless otherwise noted.