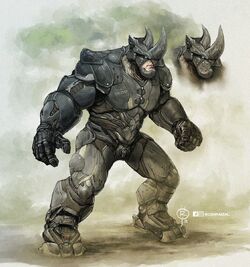 The Rhino will trample you to pieces!

Aleksei Sytsevich was a Russian mobster with an appetite for destruction. He was one of the Russian government’s most wanted, and even made enemies with the KGB. This resulted in the Black Widow completely dismantling his syndicate.

With no other options, Aleksei snuck into America. He found work under the Kingpin, who eventually volunteered him to be the test subject of a secret Oscorp experiment headed by Norman Osborn. Aleksei was promised he would be made stronger, and accepted, unaware that he was being bonded permanently to a mechanical Rhino suit.

He was then sicced on Spider-Man, who eventually defeated him by overheating the armor. Refusing to rat out the Kingpin, despite his anger towards him and Osborn, the Rhino was imprisoned in the Raft. However, he was eventually freed when Doctor Octopus formed the Sinister Six, promising to free Rhino from his suit after Spider-Man was dead.

For years the Sinister Six battled Spider-Man, unable to kill him. Eventually they were recruited by Screwball to be the stars of her livestream, “The Death of Spider-Man”. Rhino was overjoyed, believing this to finally be his moment of triumph.

He was proved wrong when the Avengers intervened. He was enraged at the sight of the Black Widow, and tried to kill her once more, only to be trampled in his own path by the Hulk. During the ensuing beating, the Hulk severely damaged the Rhino armor, which resulted in Iron Man surgically removing it from Aleksei’s body. He fell into a coma from his injuries, however, and is being held in the medical wing of the Raft.