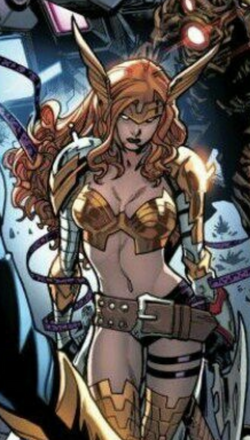 Is that all? Bring more soldiers! My blade is far too dry!

When Odin the Allfather had an affair with Lucifine, the Queen of the Angels, he agreed to let her keep their child so long as Heven cut off all communication with the rest of the Realms. For the next several centuries, Angela was raised alongside the Angels and trained to be a deadly warrior.

Eventually, Lucifine grew tired of living in solitude, and began a war between the Angels and the Asgardians. Angela had been raised to hate the Asgardians, which led to her fighting valiantly in the battle. She eventually found herself fighting against Thor, who she was able to fell by driving her sword straight through his heart. It was only then, when Odin saw his son's body, that the truth was revealed to Angela. This shook everything she knew, and just as she turned to her father for answers, he was beheaded by her mother.

Enraged, Angela ripped her sword from Thor's chest and lunged it straight into her mother's. As her mother used her last breath to tell Angela she was a disgrace, she burst out in tears and tried to convince her fellow angels to stand down, but it was hopeless. They were all too bloodthirsty. As she tried to make her escape, she was confronted by another sibling she didn't know she had; Loki. Loki was the adopted daughter of Odin, who was the rightful Queen of Jotunheim. Rather than returning to Asgard or Jotunheim, Loki took Angela on a journey to adventure throughout the other Realms that she had never seen, and she began to open up and learn what it meant to have a family.

Angela and Loki began to love each other, and eventually traveled to Midgard. However, once there, they discovered Asgardian technology had been repurposed by a cabal of supercriminals, who were in the process of overthrowing all forms of government. Angela and Loki decided to work alongside the Earth's heroes to fight them off, but during a battle in Latveria, Loki was crushed by falling debris. Angela became distracted to sit by her sister as she lay dying, attempting to comfort her, not realizing that she was seconds away from being blasted by a repurposed Bifrost Cannon.

Rather than perishing in the inter-dimensional energy, she was transported to the Nexus, where she was faced with the Silver Sentry. He explained to her that her time in her home reality had expired, and it was time for her to accept a higher calling. She was placed on Team X, a group composed of heroes from across the multiverse whose purpose was to repair the cracks spreading across reality.

Despite missing Loki dearly, Angela was thankful to feel like she had once again found a home and a purpose. She enjoyed getting to know her teammates and fighting alongside them. However, her time on Team X would be short-lived. They eventually found themselves trapped in a reality where Doctor Strange used the forces of the Dark Dimension to rule the Earth. Team X spent months fighting against him, and only after losing both Cannonball and Toad were they able to defeat Strange and save the reality. However, Earth was left in shambles, and the Silver Sentry offer Team X a reprieve before moving on to their next mission. Angela asked permission to remain on Earth-666666666 to help the people adjust to their new way of living, and the Sentry allowed it.

While Team X moved on, Angela joined the forefront of heroes who banded together to try and usher humanity into a new age of peace. While working alongside the other mystical heroes, Angela became very close with a woman named Clea, who had abandoned her home in the Dark Dimension to live among the humans. As humanity continued to make strides, Angela and Clea decided to venture into the unknown together as wives, promising their assistance should the people of Earth ever need them again.

Retrieved from "https://marvelcomicsfanon.fandom.com/wiki/Aldrif_Odinsdottir_(Earth-18892)?oldid=268736"
Community content is available under CC-BY-SA unless otherwise noted.